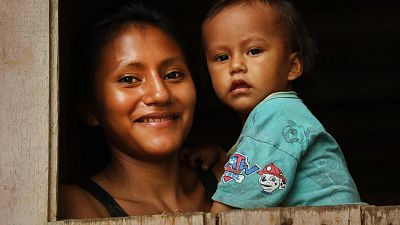 In an unprecedented show of solidarity, communities in the Amazon, NGOs and local governments are teaming up to protect Ecuador’s rainforest.

“Some previous local governments have not put much interest in people and nationalities,” says Daniel Dahua, President of the Andwa Nationality of Pastaza in Ecuador. “We as nationalities have needs in the territory [but] the willingness to act on our behalf among politicians did not exist.”

The new collaboration between Ecuador’s government and Indigenous groups seeks to change this.

A REDD+ project in Ecuador’s Pastaza region has paved the way for an even greater collaboration, named the Amazonian Platform for Forests, Climate and Human Wellbeing. It aims to combat climate change, protect critical ecosystems and threatened species, and improve the well-being of the people who live in the region.

For the first time the Provincial Government of Pastaza, the Minister of Environment and Water (MAATE) and NGOs are working together in a collaborative way within the province to carry out the REDD+ Plan, incorporating the vision of the Indigenous nationalities who live in Pastaza.

REDD+ is a framework created by the United Nations Framework Convention on Climate Change (UNFCCC) Conference of the Parties (COP). It aims to reduce emissions from deforestation and forest degradation, promote the sustainable management of forests, and conserve forest carbon stocks in developing countries.

Which groups are joining to protect Ecuador’s forests and why is it significant?

Indigenous peoples and local communities manage at least one quarter of the world’s lands and 80 per cent of the world’s biodiversity. They are integral in the fight against climate change, yet too often are overlooked by governments.

In the Pastaza region, seven Indigenous nationalities have joined forces with local provinces to protect the forest. This marks the first time in Ecuador that a provincial government and Indigenous communities have signed agreements to work together to reduce deforestation and forest degradation.

“This time we are participating and collaborating in the planning and we always coordinate in order to strengthen activities in the territory and satisfy our direct needs,” says Dahua.

“We want to see this collaboration between the government and nationalities so that we are taken into account.”

Nature and Culture International (NCI) - an international nonprofit that works with Latin American communities to conserve the local environment - is supporting the project.

“Indigenous people are the rightful owners of most of the provincial territory, including the most critical areas to save,” says Bruno Paladines, Mosaic Coordinator at NCI.

“We believe Indigenous people are the ones who can best conserve these areas using their ancestral knowledge and their own vision of governance and land management.”

Why is it important to protect Ecuador’s rainforest?

The Amazonian Platform's 4.5-million-hectare forest acts as an important biological corridor and carbon reserve. Located in the east of the country, Pastaza is home to Ecuador’s largest and best conserved forest. Covering 94 per cent of the province, the region’s forests capture more than 858 million tonnes of carbon annually - nearly double Canada’s entire footprint in 2018.

Pastaza is also home to a wide array of plant and animal groups, from amphibians to trees to insects. A single hectare in the region may contain more tree species than are native to the continental United States and Canada combined.

What threats does Ecuador’s rainforest face?

This union comes at a critical moment as threats to the Amazon from deforestation, mining and agriculture increase daily.

Since the 1960s, Pastaza has been an oil and mining hotspot. Up until now, approximately 64,000 cubic metres of oil have leaked into the Ecuadorian rainforest causing water, soil and vegetation pollution.

NCI estimates that from 2016 to 2018, over 12,00 acres were deforested each year in Pastaza, primarily due to agricultural expansion.

How will the platform protect Ecuador’s environment?

Ecuador’s plan covers forest conservation and sustainable production, with the priorities and active participation of Indigenous nationalities in Pastaza at its heart. Ultimately, it aims to decrease deforestation in the province as the population adopts sustainable production practices that conserve biodiversity and the ecosystem. The plan also hopes to secure food and income for locals.

Proposed protective actions include conservation and restoration of degraded areas, sustainable forest management, sustainable productive activities and political management. These will be implemented and coordinated by local governments and Pastaza’s Indigenous nationalities.

How will the government and Indigenous communities collaborate in Ecuador?

The project “will integrate Indigenous knowledge of land management with the development planning of Pastaza's government,” explains Paladines.

Funds for conservation are being managed collaboratively, with administrative and financial training provided to improve resource management.

“Through…direct outreach with people living in the territory, we can directly address the needs that exist [meaning] resources are invested much more efficiently. With these actions we ensure sustainable management of the forest resources for a lasting conservation impact,” Paladines continues.

In practice, Dahua says representatives from various Indigenous Nationalities have formed a council with the provincial government and NCI, where they consult on the management of the conservation areas.

Cultural preservation is also on the agenda in Ecuador

Not only do they discuss conservation of the natural environment, but also protecting Indigenous handicrafts and languages.

“Thanks to Nature and Culture International, we as the Andwa nationality have begun to build a dictionary. We are going to have our own instrument to conserve our language that at this moment is in danger of extinction. I will always be grateful [for this],” says Dahua.

“We are going to sign a conservation agreement to protect 530 hectares of primary forest in our territory. The most important thing is to conserve water basins. We will monitor and control the area. In exchange, Nature and Culture International commits to cover some of the needs we have in the territory,’ he explains.

Some of the main priorities of the Andwa people include internet and river transportation. Dahua hopes improvements in these areas will help create greater visibility for traditional handicrafts made by female entrepreneurs in his community.

Through this collaboration, he hopes Indigenous Nationalities will be empowered “to take actions that benefit the communities in the territory…[and] to solve problems that exist in the territory.”