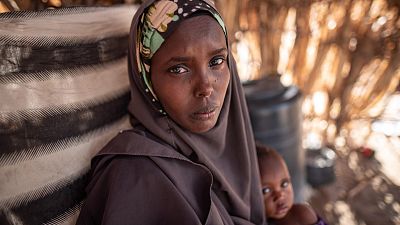 Asha, 32, holds her daughter Zeinab, who suffers from malnutrition, near their home in Garissa County, Kenya.   -   Copyright  Tommy Trenchard / Save the Children   -
By Angela Symons  with Save the Children  •  Updated: 05/08/2022

The crisis is compounded by the COVID-19 pandemic and rising food prices due to the war in Ukraine.

How many people are affected by the drought?

According to a press release by UK charity Save the Children, at least 18.6 million people across Ethiopia, Kenya and Somalia are currently living with acute food insecurity and rising malnutrition. As the drought rages on in the Horn of Africa, this number could rise to 20 million by September.

In northeastern Kenya, the number of children facing acute malnutrition has risen by 25 per cent to nearly one million this year. This number could spike further if forecasts for another failed rainy season prove to be accurate, leading to an unprecedented catastrophe.

Struggling to survive in one of the harshest environments on Earth

More than two million children live in the arid and semi-arid regions of northern and eastern Kenya. As a result of the drought, some families are forced to dig for fresh water in dried riverbeds.

Children describe not knowing where their next meal will come from or if they can afford to go to school.

While mothers nurse their sick malnourished children as they cry through the night, reports Save the Children.

Food insecurity is rising in Kenya

The drought has had a devastating impact on livestock and the communities that depend on farming. Over 1.5 million cattle have been wiped out. Those animals that have survived are too thin to sell for families to earn an income.

Young children are particularly impacted by the lack of milk from the animals and are susceptible to illness due to malnourishment.

Mahad, 12, lives in a village in the north of Garissa County close to the border of Somalia with her mother and seven siblings. Her family lost hundreds of animals to the drought, and now are struggling to afford food and the fees to keep her in school.

Their village has not seen rain for several years.

Her father Hussein, 45, says: “We're still alive. We have not died yet. But only God knows what will happen if there is another failed rainy season. We used to eat three meals a day, now we only eat two. Sometimes we go without food.”

“I pray we get rain by the mercy of God”

Dualle, 14, says since the cattle died his family has had nothing to eat. He and his four siblings go for days without food, and rely on their neighbours for support.

“The cattle are dying and so people have nothing to eat. Some nights we don’t cook supper…It's continuous, you can find you only cook food for three days and the remaining days you miss food.

The young children cry a lot because they do not have anywhere to get milk…I pray we get rain by the mercy of God.”

Education is threatened for millions of children

Millions have been plunged into poverty and families cannot afford to feed their children or send them to school. Around 3.3 million children are at risk of dropping out of school in Kenya, Ethiopia and Somalia. This has tripled in just three months.

Of his sister, Dualle says, “At times she stays at home for months, because my mother cannot afford her school fees.”

“Time is running out”

“Rising prices due to the war in Ukraine, climate change and the economic impact of COVID-19 have combined to create a hunger crisis on an unprecedented scale, putting the lives of millions of children at risk,” says Yvonne Arunga, Kenya’s country director of Save the Children.

“With rains forecast to fail once again, time is running out for these children. The world must act now to prevent catastrophe,” she warns.

Save the Children and local partners are responding to the drought crisis in northern Kenya, providing water, livestock feed and cash assistance to hundreds-of-thousands of affected households. They are also implementing nutrition interventions to ensure young children and mothers have access to treatment.

Why are French activists filling golf course holes with cement?