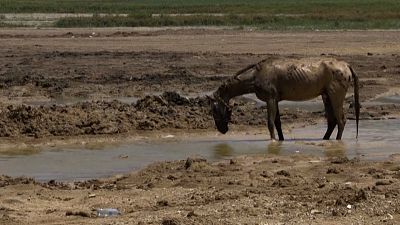 Monterrey is one of Mexico’s wealthiest cities, with a variety of light and heavy industry, international business offices and agriculture contributing to the university town’s high average personal income.

Despite this, through a combination of poor water management, a severe lack of rain and a blistering heatwave, the city is on its knees.

For some residents it has been more than 50 days since they’ve seen a drop of water fall from their taps. Many fill buckets from water trucks in the street while others have running water for just a few hours a day.

How can a city run out of water?

Nestled in mountains a few hours' drive from the US border, the city of Monterrey boasts living standards that many Mexicans could only dream of.

Residents of the northeastern city, whose metropolitan area is home to around five million people, have in general been spared the chronic lack of services that plagues many poorer areas of the country.

Despite being a modern and thriving city, home to international companies, few houses are equipped with water tanks, which are common in other large cities including the capital Mexico City. And with prices skyrocketing, residents can’t afford to buy one now either.

"They weren't needed," said municipal councillor Javier Torres, who supervises tanker trucks bringing water to Garcia, an area on the outskirts of Monterrey, where whole families run outside with buckets to collect the precious liquid.

According to local authorities, of three local reservoirs which supply the city’s water, one had dwindled to less than one per cent of its capacity by the end of June. Another was at seven per cent and the third at 44 per cent.

How to solve water shortages in Monterrey

On a governmental level, cloud seeding is being proposed. A technique used elsewhere in Mexico to try to provoke rain by dispersing chemicals in the sky.

On a day to day level, Monterrey has a booming farming and industrial sector producing soft drinks, beers, steel and cement - all of which are water guzzling activities.

Following negotiations with federal authorities, businesses and farmers have now agreed to take steps to ease the shortage.

"Some companies have stopped working on some days of the week to save water,” says city councillor for Garcia, Javier Torres.

Some of these businesses have even redirected their water to be distributed in neighbourhoods.

But some think it’s too little, too late.

"We must remember what is determined in the National Water Law where in times of crisis or uncertainty there is always a priority on human consumption over industrial and agricultural exploitation,” says Antonio Hernandez Ramirez, a local biologist and environmentalist.

“This is not happening sufficiently, the reality is in the opposite direction."

Watch the video above to learn more about Monterrey’s drought.