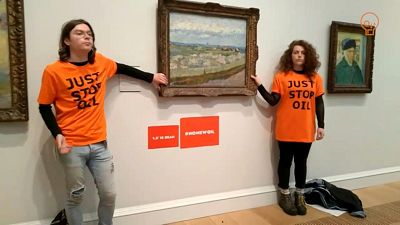 Environmental activists got themselves into a sticky situation on Thursday during a protest in a London gallery.

The two activists from Just Stop Oil, a movement campaigning against fossil fuels, glued their hands to the frame of a Vincent van Gogh painting at the Courtauld Gallery in London’s Covent Garden.

"Sorry everybody, we don't want to be doing this. We're here glued to this painting, this beautiful painting, because we're terrified for our future,” said Louis McKechnie, one of the protesters.

The painting in question was Van Gogh’s Peach Trees in Blossom (1889), a rural scene in Arles, France.

The painting was chosen specifically following news that this area of France may soon experience a drought, because rainfall levels were 45 per cent below historic averages this past winter and spring.

“As a kid I used to love this painting, my dad took me to see it when we visited London,” Louis explained.

“I still love this painting, but I love my friends and family more, I love nature more. I value the future survival of my generation more highly than my public reputation.”

The aim of the protest was to call for the government to end new fossil fuel projects and for art institutions to join them in civil resistance.

“We're here because the UK government is pushing through over 40 new fossil fuel projects. And with every single project they sign, it's like signing our death warrants,” he added.

Who is behind Just Stop Oil?

Just Stop Oil is a UK-based action group made up of several other environmental groups. Its main aim is to stop the future licensing and consents for the exploration, development and production of fossil fuels in the UK.

It is the second time this week that the action group has been involved in gallery protests. Three other protesters in Glasgow glued themselves to a piece of art at the city’s Kelvingrove Art Gallery and Museum on Wednesday.

The painting chosen in Glasgow was a 19th-century landscape painting by Horatio McCulloch called My Heart’s in the Highlands.

“This landscape was painted in 1860 at the height of the Highland clearances, when whole crofting communities were evicted by a new class of landlords ruthlessly pursuing their own private interests,” explained Carmen Lean, a student who took part in the protest.

“It was only when crofters organised and resisted that they won rights.”

Watch the video above to see more from this protest.