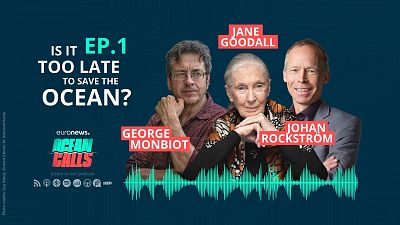 Confronted with an “existential crisis”, we don’t engage with the problems of our oceans “with the seriousness they demand.” This is the message from renowned British environmentalist George Monbiot in the first episode of a new Euronews podcast, Ocean Calls.

“We've got to take serious issues seriously. And we find ourselves, instead, facing this daily tsunami of trivia and nonsense. One celebrity slaps another and it gets more coverage than all the climate coverage there'd been in the previous year”, says Monbiot, who started his career as a journalist and is now one of the world’s best-known climate activists.

“This is particularly the case when it comes to the oceans, which are doubly, triply neglected. If we don’t start talking about the ocean, it will be too late, it’s a self-fulfilling prophecy.”

What is the Ocean Calls podcast?

From deep-sea mining to illegal fishing, Ocean Calls is a new Euronews podcast series, focusing on the issues making waves on our blue planet.

In the first episode, our guests will attempt to answer perhaps the most important question of them all: can we still save the ocean?

‘The entire Earth system's function is at risk’

Debating with George Monbiot is Professor Johan Rockström, the scientist who pioneered the concept of ‘planetary boundaries.’ In a nutshell, this theory calculates how much biodiversity we can afford to lose and how much global warming the earth can tolerate before our climate becomes too unpredictable.

“The Arctic is melting so fast that very soon we will have ice-free summers and destabilising of the weather systems in the northern hemisphere, which we're already seeing”, he says.

Rockström’s ideas have been used by the UN and other influential organisations to help them predict our planet’s future and set the goals that are needed to avert the worst impacts of climate breakdown.

"We’re approaching tipping points, we're putting the entire Earth system's stability and function at risk. And the ocean is what keeps it stable", he argues.

Overfishing, ocean acidification, and ocean pollution are just some of the topics that Professor Johan Rockström and George Monbiot discuss in the first episode of our series.

You’ll also hear from leading ethologist, Doctor Jane Goodall DBE, talking about her favourite marine species. Let us know on Twitter if you guessed what it is, using the hashtag #OceanCalls.

Created by marine lovers at Euronews for nature fans around the world, Ocean Calls is a bi-monthly podcast. In the next episode, Director of Fisheries at the Food and Agriculture Organisation (FAO), Manuel Barange along with Oceana’s European Policy Advisor, Vanya Vulperhorst, will discuss whether it’s okay to eat fish if you love the ocean.

Subscribe to our show on your favourite podcast app.

Created in partnership with the European Commission's DG Mare.

Five phrases that made waves at the UN Ocean Conference

Podcast: Listen to every episode of Cry Like a Boy