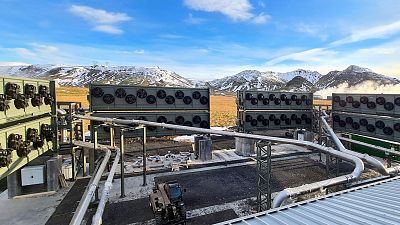 Construction is due to begin on Wednesday on what could become the world's biggest plant to capture carbon dioxide from the air and deposit it underground.

The Swiss company behind the nascent green technology is start-up Climeworks AG, which says its direct air capture (DAC) plant will be built in Iceland in 18-24 months, and will have have capacity to suck 36,000 tonnes of CO2 per year from the air.

This may be just a sliver of the 36 billion tonnes of energy-related CO2 emissions produced worldwide last year.

But it is a 10-fold increase from Climeworks' existing DAC plant, currently the world's largest, and a leap in scale for a technology scientists this year said is "unavoidable" if the world is to meet climate change goals.

The "mammoth" plant will have have capacity to suck 36,000 tonnes of CO2 per year from the air.

The new "mammoth" plant will contain around 80 large blocks of fans and filters that suck in air and extract its CO2, which Icelandic carbon storage firm Carbfix then mixes with water and injects underground - where a chemical reaction turns it to rock.

The process will be powered by a nearby geothermal energy plant.

"When direct air capture is combined with underground storage, it is the most effective carbon removal solution", stated our co-CEO @ChristophGebald today at #buhlernwd22, introducing Climeworks. Thank you for the great event @Buhler_Group! pic.twitter.com/BjZUUN6bgb

Co-CEO Christoph Gebald said once this plant launches, Climeworks intends to build a far bigger facility capturing roughly half a million tonnes of CO2 per year - and then replicate multiple plants of that size, backed by project financing, towards the end of the decade.

'Mammoth' was part-financed by a 600 million Swiss Franc (€594 million) financing round Climeworks announced in April. The firm also sells among the world's most expensive carbon removal credit - costing up to €1,000 per tonne - to buyers including Microsoft, Audi and Boston Consulting Group.

"It's the cost of scaling up," Gebald told Reuters. "This is, so to say, the investment we have to do as a company to move forward."

The world currently has 18 direct air capture facilities, according to the International Energy Agency. US oil firm Occidental also plans to launch a large-scale DAC facility, in late-2024, to collect 1 million tonnes per year of CO2.

The UN's Intergovernmental Panel on Climate Change has said energy-intensive and costly technologies like DAC will be needed to remove CO2 on a large scale in the coming decades, to limit global warming to 1.5C and avoid increasingly severe climate impacts.

Heleen De Coninck, an IPCC author and professor at Eindhoven University of Technology, said DAC must be powered by CO2-free energy to be useful, and should not replace urgent reductions in greenhouse gas emissions.