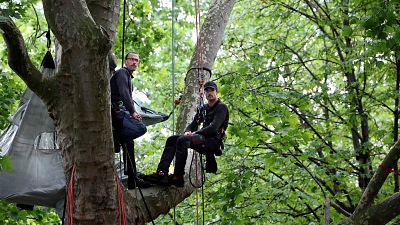 Thomas Brail sits on a branch of a century-old tree in Paris as a protest against the renovation project of the surroundings of the Eiffel Tower.   -   Copyright  THOMAS COEX/AFP
By Doloresz Katanich  with AFP & EBU  •  Updated: 08/06/2022

A French activist has been camping on top of a 200-year-old tree at the foot of the Eiffel Tower in Paris to protect it from an urban development project.

Thomas Brail, founder of the National Tree Monitoring Group (GNSA) has gained attention from various tree-climbing stunts in the capital over the years.

He is currently camping at the top of a giant plane tree – one of three ancient trees once spared by Gustave Eiffel in the construction of his most famous work.

The trio are now threatened by a tourism development project along with some 40 other trees.

Brail climbed the majestic tree on Paris' Champ de Mars on 30 May, before going on hunger strike from 4 June.

He’s already had some success. Paris’s deputy mayor in charge of urban planning and architecture Emmanuel Grégoire announced on the 30 May that the Paris City Hall's development plan - known as the OnE project - will be revised in order to protect the trees.

But Brail demands the cancellation of the whole project and says he will stay in the tree until he has obtained a guarantee that it will be protected.

The protester intends to stay on top of the tree until the mayor of Paris withdraws the construction project entirely. He says it also risks damaging the roots of certain trees, including the plane tree he is camping on.

"The project is being reviewed in order to protect all the trees on the site," responded Grégoire, who also promised to sit down with opponents of the project.

He added that "there will be no construction that has an impact on the root system of the trees.

"Brail is also fighting against what he calls "the industrialisation of forests".

He is urging new Prime Minister Elisabeth Borne to pass a new law which would protect healthy trees from being cut down in the name of "developments".

Watch the video to see Thomas Brail living in a tree.