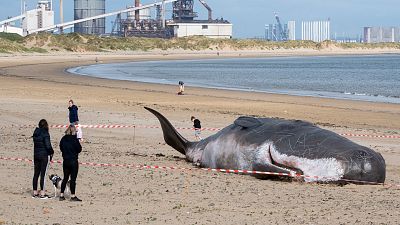 Residents of a UK coastal town were shocked to find a beached whale washed up on shore when they were strolling along the seafront yesterday.

The unfortunate creature - a sperm whale - was discovered by locals in Whitehaven, on the northwest coast of Cumbria.

It was attended to by scientists who were carrying out experiments on the stinking carcass to determine what had happened.

What is the whale sculpture in Cumbria?

“Me and my partner were walking into the town…and as we were walking down the street his next door neighbour yelled at us from his motorbike ‘you’ve got to see the whale'," says Frances Gallagher who is visiting Whitehaven for the weekend.

“When we got down there it was this massive, massive whale and it stank of fish and there was scientists on the beach.

"They were all wearing fleeces that said International Whale Association or something like that.

“I was just staring at it for ages. I couldn't believe it, it was amazing. Everyone was crowded around taking pictures."

But the whale is in fact a ‘hyper-real cultural intervention’ designed to provoke a reaction among residents of the port town.

The same model had already ‘washed up’ once this week, around 150 miles away on the opposite coast of Redcar, and will be making more stops on its tour of the UK.

"When we got home and my little brother told me it was a fake I was devastated,” Gallagher continues.

It follows numerous appearances in other European cities and towns, including Paris, Madrid and London, since the replica was made in 2013.

"A riddle from the deep. The beaching of a whale has always been a magical event. Villages trembled and were exhilarated when it happened,” say Eden Arts, the collective responsible for the work.

"This is what we reconstruct. At the same time the beached whale is a gigantic metaphor for the disruption of our ecological system.”

Climate change can cause an increase in stranded whales. As the seas warm longstanding chemical and biological compositions of the water will change, interfering with the echolocation systems of whales and confusing them.

Who made the beached whale sculpture?

The sculpture, which was created by a Belgian arts organisation called the Captain Boomer Collective, is surrounded by performers who carry out ‘experiments’ on the whale and engage the public.

It is part of the collective Eden Arts’ ‘66 Project’ designed to bring innovative artwork to the region of the UK spanned by the A66. This major road runs from the west coast of Cumbria to Teesmouth via County Durham and Carlisle.

“Autopsy, sampling, dissection, etc are acted out in detail. We also show people parasites, teeth, samples of skin and (real) spermaceti oil. The site is often very popular with school classes and children,” says the collective.

“The psychological archetype of the dead big fish leaves no one untouched. It stirs and mobilises a local community. During our beachings, we see an intensive interaction among the crowd. People address each other, speculate and wonder. They offer help and ask for information.”

How common are beached whales?

Currently in Whitehaven until Saturday (28 May), it is not known where the fake cetacean will wash up next.

Real whales can become beached when they are trapped after swimming into shallow water or against currents.

In 2020 120 whales were rescued by locals who ushered them back into the water from a Sri Lankan beach.

Closer to home in Scotland, 10 long-finned pilot whales were saved after locals saw them entangled in seaweed on the beach of the remote island of Uist. Rescuers led by the charity British Divers Marine Life Rescue managed to save all of the marine animals.

Unless something is done about the world’s carbon emissions, events like this will become more common.