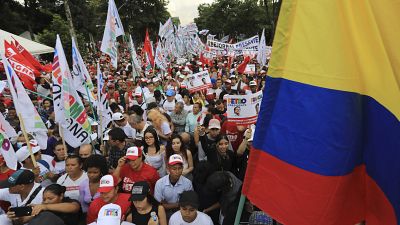 Supporters of Historical Pact coalition presidential candidate Gustavo Petro, Colombia.   -   Copyright  Jaime Saldarriaga/Copyright 2022 The Associated Press. All rights reserved.
The opinions expressed in this article are those of the author and do not represent in any way the editorial position of Euronews.
By Jon Bonfiglio  •  Updated: 07/06/2022

There is a point in every conflict where time - the great leveller - drains and defeats combatants, more than any foe can.

It passes over their idealisms, their will, and - for those that survive - their bodies.

Because as fighters age, they inevitably tire of the blood and violence, and question the horrific methods they employed, which generally achieved nothing much beyond brutalising the very society they had hoped to change.

It is hardly a surprise, therefore, that Gustavo Petro, the current frontrunner for the Colombian Presidential election, and likely first leftist national leader in the country’s history, also happens to be a militant guerilla.

Polling in the high thirties just before the first electoral round on 29 May, Petro’s popularity and acceptance by those who would never have dared look favourably on such a figure in the past says much about the candidate himself - in particular his charisma and oratorial skills.

Much more significantly, however, it marks a point in time in the history of Colombia; a point in time in which a country which has lived so much horror is for the first time willing to dialogue with its violent past and specifically the voices and reasons which underscored the insurgency for half a century.

In naked faceless figures, this memory lists over 270,000 known killings and 7 million internally displaced persons since the 1960s. All this in a population which currently runs at 50 million. In other words, roughly 1 in every 7 people has been forced to leave their home, with 1 in 200 killed.

What all this adds up to, beyond the figures, is an unending collective memory of loss, pain - and enduring terror.

It is clear that Petro is not the only figure emerging from violence - the entire country is, or hoping to.

Further marking the stark landscape of the past which continues to permeate the present, Petro’s vice-presidential running mate Francia Márquez is Afro-Colombian, from communities - working class, rural, black, female - which have historically been under the yolk of oppression and its quotidian terrors.

Márquez, in fact, survived an assassination attempt only weeks before polling, and on being linked to violent groups by the ruling party, declared that “what really makes the (current) president uncomfortable is that today, a woman who could have been the maid in his house, could now be his vice president.”

What really makes the (current) president uncomfortable is that today, a woman who could have been the maid in his house, could now be his vice president.

This fundamental emergence into the mainstream political sphere of previously marginalised voices is having a highly visible effect on the pre-election landscape, in some predictable and a few not-so-predictable ways.

Among the most obvious: economists warn of an exodus of foreign investment; students, activists and progressives rejoice in the possible values-led reshaping of society; the right warn of the perils of the communist advance - and agrarian communities consider the possibility that their voices might actually be heard and considered.

Chaos and extractivism are rife

This tectonic shift in control over affairs of the state, however, has also had some surprising repercussions.

In particular, as militants who controlled vast swathes of the country laid down their weapons and entered an imperfect peace process in 2016, a political and policing vacuum was generated in the areas they previously controlled.

As so often in Latin America, however, government infrastructure does not have the capacity, organisation or financing to step into these voids. The very same governments that were unable to militarily defeat the rebel FARC (Revolutionary Armed Forces of Colombia) over half a century, even with vast military support from the USA, are patently unable to generate control and security in those same areas today.

Enter the third major force in the Colombian trinity of power: organised crime.

The truth is that organised crime never really went away.

“The truth is that organised crime never really went away,” says Luis, a Human Rights Defender who has asked not be named for fear of repercussions.

“It took a big hit and fragmented in the nineties after the killing of Pablo Escobar, but it was still there waiting for contexts to align, because the social conditions which predetermine young men entering organised crime - and the vested interests which drive that crime - never altered. And when the FARC realigned and started leaving their jungle and rural strongholds, in stepped a new generation of cartel - which have very specifically found space to breathe in the landscapes previously controlled by the guerillas.”

Environmentally, what Luis says is most marked about these emergent groups is that they do not just deal in drugs, but are in fact “multi-directional entities intent on generating vast profits by any means possible, which on unprotected land makes them the most focused on extraction of natural resources.” In other words, logging, the illegal trade in exotic species, wildcat mining, and so on.

In many areas the peace agreement between the Government of Colombia and the FARC “exacerbated deforestation.

“It’s one of the reasons that killings of land rights defenders have recently gone through the roof in Colombia, because they are completely unprotected and isolated now, and organised crime has no interest in dialogue.”

Earlier this year, Frontiers in Environmental Science published a seminal paper entitled What Peace Means for Deforestation: An Analysis of Local Deforestation Dynamics in Times of Conflict and Peace in Colombia. The conclusions of the study are clear, namely that while certain regions and municipalities were able to buck the trend, in many areas the peace agreement between the Government of Colombia and the FARC “exacerbated deforestation.”

Interestingly, the paper does not just argue for the importance of coherent “peacebuilding in delivering forest conservation”, but also realigns the arrow, pointing out the important “role of forest conservation in delivering peace.” In particular by supporting former fighters to remain in situ, and working on shared land titles and economic environmental protection incentives.

The difference between old men and young men

In a not insignificant irony, it is now in large part the old men of political violence who are to be charged with policing and demilitarising the new young men of criminal violence. And who are to be given the opportunity to establish a baseline for a Colombian future that gives the country, its people and its spectacular environment the chance of a new beginning.

Peace, real peace, a peace which involves - in the words of former President Juan Manuel Santos - “all the victims of the conflict,” may not be palatable to many. But as countries such as South Africa and Northern Ireland have demonstrated, it is the only slow and imperfect path out of the mess of history.

It is also the best avenue to safeguard Colombia’s environment, natural resources and biological wonders.

Peace, it seems, can be a many splendored thing.