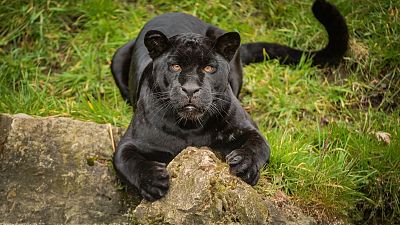 Tissues from the ear of a nine-year-old female jaguar which died at Chester Zoo are being kept for posterity at Nature's SAFE.   -   Copyright  Chester Zoo
By Lottie Limb  •  Updated: 01/12/2022

Animals at risk of extinction are having their reproductive cells stored at a major ‘biobank’, as security for their species.

Jaguar, Eastern black rhino and mountain chicken frog are some of the highly threatened species which have been given the freezing treatment by scientists at Nature’s SAFE, one of Europe’s largest biobanks of living tissue.

Small tissue samples from ovaries and testicles are taken from the animals that have passed away at Chester Zoo and, using cutting-edge technologies, cryogenically frozen at temperatures of -196C in liquid nitrogen.

Time essentially stops at this deeply low point, pausing all natural chemical processes in the cells. The frozen samples could be used in the future to resurrect a species otherwise lost on Earth.

“With gene pools and animal populations continually shrinking in the wild, the work of modern conservation zoos like ours has never been more important,” says Dr Sue Walker, head of science at Chester Zoo and co-founder of Nature’s SAFE.

“Technologies, such as cryopreservation, offer us a new, critical piece of the conservation puzzle and help us provide a safeguard for many of the world’s animals that, right now, we’re sadly on track to lose.”

More than 40,000 species are deemed to be threatened with extinction today, according to the International Union for the Conservation of Nature (IUCN). A large underestimate as only 7 per cent of the world’s species have actually been evaluated.

Human activity is known to have forced 869 species to extinction in the last 500 years, and we are now amid a biodiversity crisis that threatens to extinguish one million species of plants and animals.

How does cryoconservation work exactly?

Animals that pass away at the UK’s largest charity zoo can still contribute to the continued existence of their species. The unique genetic code of a Javan green magpie, for example - driven to the brink of extinction by poachers - lives on in vials at the Shropshire-based biobank.

Nature’s SAFE outlines a number of different ways it preserves species, depending on what kind of sample is harvested.

Sperm cells can be extracted from an animal’s testes post-castration, before being stored in test tubes of nutrient-rich, cell-friendly anti-freeze and placed in the containers of liquid nitrogen.

The idea is that the sperm can be thawed, and used to fertilise an (also frozen) egg, with the embryo then implanted in a surrogate mother.

Ovarian and testicular tissue is also being kept indefinitely at the biobank, with scientists working on ways to make cultures from it that can produce egg and sperm cells for future breeding programmes.

Even skin cells can, under the right conditions, be reprogrammed into ‘pluripotent’ stem cells - meaning they can be turned into any kind of body cell, including sperm and egg cells.

Under this pioneering method, a skin biopsy from an Eastern black rhino’s ear could be the key to saving the species.

Of course, most conservationists hope the biobank will never be necessary. It is not a replacement for protecting the dwindling numbers of wildlife which still live but Tullis Matson, chair and founder of Nature’s SAFE says it offers a final hope.

“We know the sixth mass extinction on Earth is underway, and there will be rough times ahead,” he says.

“The question is what do we want to do about it? And our answer is: we want to secure future options for biodiversity, by acting now.”

Hydroponics: Inside the refugee camp growing veg without soil