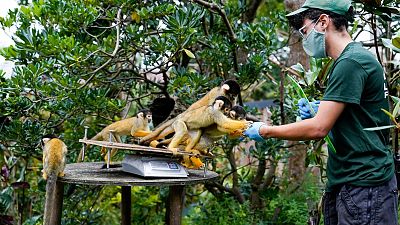 Transmission between animals and humans of novel pathogens is a big issue which caused the COVID-19 pandemic   -   Copyright  AP Photo/Alberto Pezzali
By Tim Gallagher  •  Updated: 26/05/2022

Experts at the 75th World Health Assembly in Geneva have called on governments to prevent the spread of zoonotic diseases to avoid ‘the next pandemic’.

At the conference, the first in-person since the start of the COVID-19 pandemic, specialists from Preventing Pandemics at the Source (PPATS) called for an end to deforestation, the illegal wildlife trade and better healthcare for those in hotspot areas.

“The current monkeypox virus outbreak reminds us that spillover of zoonotic viruses is an ongoing occurrence, driven by our increasingly frequent contact with wild animals, and we can’t afford to take our eye off the ball when it comes to prevention,” says Dr. Jon Epstein, Vice President for Science and Outreach with Ecohealth Alliance, and an expert in viral disease ecology.

“There are and will continue to be zoonotic viruses knocking on the door, and, given how devastating pandemics like COVID-19 have been, our best strategy is to reduce the activities that lead to outbreaks, including deforestation, intensive livestock production and wildlife trade.”

Monkeypox is endemic in West and Central African countries like Nigeria and the Democratic Republic of Congo, and cases found outside those regions are usually linked to travel there.

However, person-person contact has been identified in European countries as well as North America and Australia, where the disease is not endemic.

Symptoms include fever, fatigue and a blistering rash for those who contract the virus.

Monkeypox is generally mild and no fatalities have yet been recorded among the positive cases in Europe, North America or Australia - meaning it poses much less of a threat than COVID-19.

What are zoonotic diseases?

One way in which monkeypox is similar to COVID-19 is that it is a zoonotic disease.

Monkeypox was first discovered in monkeys in 1958 and the first recorded human case was in 1970.

Monkeypox was first discovered in monkeys in 1958 and the first recorded human case was in 1970.

In African countries where the disease is more common, evidence of the monkeypox virus has been found in many animals including rope squirrels, tree squirrels, Gambian pouched rats, dormice, and many species of monkeys.

“People living in or near forested areas may have indirect or low-level exposure to infected animals,” explains Dr. Gladys Kalema-Zikusoka, founder and CEO of Conservation through Public Health.

Contagion from animals to humans can be caused through a bite or scratch, with the most likely carriers being rodents.

Other zoonotic diseases can be transmitted through inadequately prepared meat and animal products; this is how anthrax was originally spread.

With monkeypox, the current human-to-human transmission in non-endemic countries is happening through close contact between people.

What are the dangers of zoonotic diseases?

While illnesses like COVID-19 and Ebola pose more of a threat to life than monkeypox, zoonotic diseases do pose particular challenges for human populations.

During the pandemic we’ve seen in real time what happens when a new pathogen begins to infect populations with no immunity, combined with the stress of finding treatments and vaccines.

“They can be difficult to treat if they are not common and not all of them have a direct cure,” says Kalema-Zikusoka.

Contagion from animals to humans can be caused through a bite or scratch, with the most likely carriers being rodents.

It has taken many decades to develop the highly effective treatment for HIV/AIDS that is used now, with still no effective vaccine available.

It’s the novelty of zoonotic diseases in humans that makes them so dangerous.

How can we prevent zoonotic diseases?

Education is one way to prevent zoonotic diseases, with many ignorant of how they spread.

For example, teaching people the dangers of eating meat from an animal that died of unknown causes, or eating meat that isn’t properly cooked, can stop contagion. Likewise strengthening education on conservation and the need to adhere to the great ape viewing guidelines (mask wearing, 10m distance and a 1hr viewing limit) in the tourism sector can limit the spread.

Legal enforcement of poaching laws would reduce human-animal contact, as would ending deforestation and human intrusion into other wild habitats like swamps.

Above all, a combined approach to human, animal and environmental health can help, says Kalema-Zikusoka, who calls this a ‘One Health’ approach.

“Activities that mitigate and adapt to climate change can help reduce emerging infectious and zoonotic diseases,” she concludes.

Whether it’s monkeypox, or the next coronavirus, governments must take all necessary actions both nationally and globally to truly prevent pathogen spillover from wildlife,” says Vice President of International Policy at the Wildlife Conservation Society, Dr. Sue Lieverman.

“They must not sit idly by and wait for the next global pandemic.”