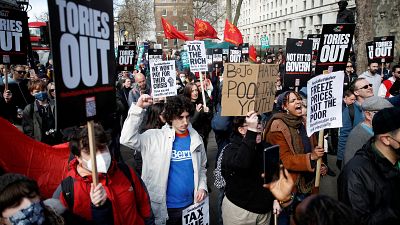 “Generally it’s not very resilient and people don’t know about it.”

That’s how Professor Aled Jones, an expert on finance, risk and resource management, describes the food system we all rely on to be able to eat every day. Or rather, to be able to go to markets and supermarkets and find food on the shelves.

The Ukraine war has laid bare the vulnerabilities of our food system, just as the early months of the COVID epidemic did.

As Putin launched his attack the Russians focused on southern cities like Mariupol and Odessa on the Black Sea; these key ports are essential for Ukraine’s food exports.

Now, exactly three months from the first day of Russia’s all out invasion, the UN has warned that millions around the world could be tipped into food insecurity, malnutrition and starvation.

High-importing countries and those who are already struggling to make ends meet will suffer most, but there is also concern about price rises in developed economies in Europe and North America.

Could price rises caused by weaknesses in the global food system lead to civil unrest in Europe? Let’s find out.

Where does our food come from?

The war in Ukraine has put pressure on global food supplies because so many staples are exported from the eastern European nation.

Ukraine exports one-tenth of the world’s wheat, one fifth of barley and rapeseed, and roughly half of sunflower seeds consumed globally. The country is one of a handful of nations which grow the majority of the staples we eat. Does this mean that our global food system is vulnerable to shocks like war?

Which countries are most at risk of food shortages?

Major staple growers like India and China produce grains to be consumed within their highly-populated countries. But others, like Brazil, Australia, and the USA, are net-exporters.

“Any countries that are reliant on global markets are reliant on these countries and anything that goes wrong in those countries like a drought or famine or war can have a huge effect on how food moves around the system,” Professor Jones, director of the Global Sustainability Institute at Anglia Ruskin University, goes on to say.

Middle Eastern nations could suffer the most with Egypt and Libya importing over 40 per cent of some of their food from Ukraine, however, the country’s exports dominate in West Africa too with Nigeria, Senegal and Guinea all importing highly.

Even countries as far afield as Southeast Asia could feel the sting of Russia’s invasion, with Indonesia and Thailand importing over a third of their staples from Ukraine.

What is the effect of war on the global food system?

Events in the Suez Canal last year showed that there are some trade arteries that when blocked can cause massive disruption to supply chains.

The war in Ukraine initially caused concerns over planting and harvesting crops due to access to land, disruption to supply of seeds, and displacement of people. However, the issue has now become one of infrastructure and transport with Russia’s blockade of Ukrainian ports in the Black Sea.

Last week UN World Food Program Chief David Beasley urged Putin to let exports leave the ports if he had “any heart for the rest of the world.” Meanwhile Ukraine’s Baltic neighbour Lithuania has proposed naval escorts for food carriers to ease the global food crisis.

When the market responds to shortages, prices go up. This makes imports more expensive causing inflation to go up causing a feedback loop which governments respond to.

This can already be seen in India. Previously planning to increase its international trade of wheat, it has now banned exports. Indonesia too recently banned exports of palm oil in response to international price rises, but has since reneged on the policy.

What are the political consequences of food shortages?

Between 2009 and 2011 droughts and fires in Australia and floods in the US led to a drop in exports from those countries. As a result, high-importing countries like those in the Middle East suffered inflation, leading to civil unrest.

Already in Sri Lanka there is political and civil unrest over inflation. Many are closely watching the situation in countries like Lebanon, Pakistan and Somalia where living standards are already strained.

Is inflation rising in Europe?

Despite insulation from raw ingredient increases, it’s the toxic combination of food prices and energy prices that is making life difficult for many in Europe at the moment.

“You can see the middle classes…having very little disposable income and having to make choices, [then for] the working class on the minimum wage, their squeeze is huge.

“It’s those people that will decide whose fault it is and whether they’re going to go out and protest about it.”

Can protests over the cost of living turn violent?

Political protests over price increases can easily spill over into violence, as happened in France in 2019 when the Gilet Jaune protestors set fires and vandalised buildings in response to fuel hikes.

Given the scenes at the US Capitol last year, could similar protests sparked by the cost of living crisis in Europe spill over into long-term civil unrest or even regime change as in the Arab Spring?

Jones thinks not, as while trust in political institutions is at an all-time low in Europe, cynicism isn’t as entrenched as it was in places like Egypt and Tunisia.

“The way it’s usually expressed in European countries is people go to extremes in their voting rather than taking down the government by physical violence,” says Jones.

“We have that exit valve to relieve some of the stress. It’s more likely we'll get more extreme governments than a violent overthrow of the government.”

France’s recent election showed high levels of support for both the far-right and far-left. Marine Le Pen won over 40 per cent of the vote in her runoff against incumbent President Emmanuel Macron and prominent left-winger Jean-Luc Mélenchon was only a percentage point behind her to enter the second round.

Elsewhere in Europe, the centre-left are in power in Germany with support for the extreme-right AFD falling, while Slovenians recently ousted a populist for a liberal leader at the ballot box.

With the true extent of the cost of living crisis not yet known, and the war in Ukraine far from over, it’s hard to say what price European societies will pay in the end. The dangers of protest tipping into civil unrest are ever present, but it will be up to governments to respond and prevent peaceful dissent turning into scenes of violence.