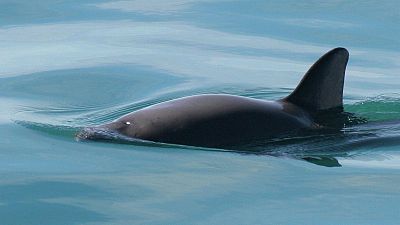 The plight of vaquitas has only worsened in recent years, but scientists have some relatively good news about the little porpoise.

Despite only around 10 individuals still existing in Mexico, a team of biologists have found that the species remains healthy and can survive - so long as illegal fishing in their waters stops.

Vaquitas, which belong to the cetacean family of dolphins and whales, are the world’s rarest marine mammals. With large dark rings around their eyes and dark patches on their lips resembling smiles, they’ve long been a poster child of conservation groups.

But despite their endearing appearance to humans, there’s a sad probability they’ll disappear in our lifetime unless quick action is taken.

"Interestingly, we found the vaquita is not doomed by genetic factors, like harmful mutations, that tend to affect many other species whose gene pool has diminished to a similar point," says Christopher Kyriazis, a doctoral student in ecology and evolutionary biology and a co-lead of the new research published in the journal Science.

They were only discovered in 1958, so we haven’t had much time to get to know them properly. ‘Vaquita’ is Spanish for “little cow”, a fitting name size-wise as they measure around four to five feet - smaller than the average bathtub.

Vaquitas were given this quaint name by local fishermen and it caught on, but their scientific name is actually ‘Phocoena sinus’. The first part of the name is Latin for porpoise (literally “pig fish”) and ‘sinus’ means cavity in reference to the Gulf of California.

This narrow strip of sea, part of the Pacific Ocean which flows between mainland Mexico and the peninsula of Baja California, is the only place the porpoises live. With their numbers drastically falling in recent years, vaquitas are now limited to the northwestern corner of the gulf.

As the species doesn’t migrate - and females give birth to only one calf every two years (after a gestation period of 11 months) - the surviving cetaceans are in urgent need of protection.

Vaquitas are vanishing from “the world’s aquarium”

The Gulf of California, otherwise known as the Sea of Cortéz, supports an extraordinary diversity of marine life. So much so that it was nicknamed “the world’s aquarium” by French diver Jacques Cousteau in 1940 (the red-hatted inspiration for Wes Anderson’s film The Life Aquatic).

Since then it’s teeming inhabitants have been threatened by industrial and over-fishing, pollution, pesticide run-off and more.

Most troubling for vaquitas is the illegal nets that fishers use to catch another protected species: totoaba. These fish are a similar size, and foreign interest in their ‘swim bladder’ has fuelled demand for them.

Dubbed “cocaine of the sea,” 10-year-old dried swim bladders can sell for more than €71,000 a kilo in China, where they are highly prized for their unproven ‘medicinal properties’.

The fishermen of San Felipe, a coastal town on the peninsula, make only a fraction of this. But the economic drivers are pushing them to use gillnets - curtains of large mesh that entrap the vaquitas as well as totoaba.

Vaquitas are ‘not doomed’ by their genetics

If this human threat were removed, vaquitas’ small gene pool would not hold them back from multiplying.

The researchers analysed the genomes of 20 different vaquitas that lived between 1985 and 2017 to predict the species extinction risk over the next 50 years. Even with inbreeding, they concluded that vaquitas have a very high chance of recovery, provided gillnet fishing ends immediately.

In fact, of 12 marine mammal species genetically examined, the scientists found that vaquitas had the lowest number of potentially harmful mutations.

They're essentially the marine equivalent of an island species.

It helps that they have always been a small population in a very small habitat. "They're essentially the marine equivalent of an island species," explains co-lead author Jacqueline Robinson, a postdoctoral scholar at the University of California, San Francisco.

Vaquitas have survived for tens of thousands of years with low genetic diversity. And, happily, the researchers report that the surviving mammals are actively reproducing and appear healthy.

Why are they no longer being protected in Mexico?

To protect the critically endangered porpoise, the Mexican government established a ‘zero tolerance’ zone in the upper Gulf of California in 2017, even expanding it in September 2020.

But just 10 months later it granted fishers open access to the refuge. Though gillnet fishing is technically still banned, it will likely increase without proper enforcement.

It is this development that conservationists believe will seal the fate of the adorable mammal. Marine consultant Kate O’Connell of the US-based Animal Welfare Institute previously told Mongabay that she fears this is “the death knell for the vaquita”, which “are being mismanaged to death.”

The loosening hold on fishers looks like an appeal for popularity, and votes. But experts also point to the failure to tackle the underlying trafficking and organised crime networks that are driving illegal fishing.

Concerned members of the community and NGOs haven’t given hope yet. Mexican NGO Museo de la Ballena is one of a number of groups that has been removing gillnets from the formerly protected area. It is also working with locals and sponsoring alternatives to fishing, such as oyster cultivation.

The loss of vaquitas would be a great tragedy, says Robert Wayne, professor of ecology and evolutionary biology at UCLA, and senior author of the new genetic study.

The loss would be a great tragedy, says Robert Wayne, professor of ecology and evolutionary biology at UCLA, and senior author of the new genetic study.

Vaquitas represent “a unique evolutionary lineage,” he says. “There is no similar species anywhere in the world, and its loss would rob the ecosystem of an important predator adapted to this unique ecosystem."

Rescue team risk their lives to save whale entangled in rubbish