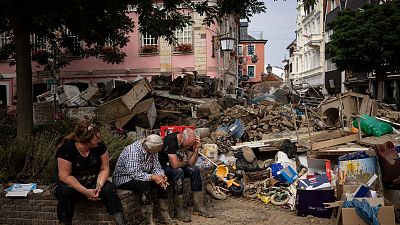 Victims survey the wreckage after a flood in Germany, climate events like this will be more common thanks to global heating   -   Copyright  AP Photo/Bram Jannsen
By Tim Gallagher  •  Updated: 18/05/2022

Four of the key indicators for climate change have broken records once again in a grisly indictment of the lack of effort to limit catastrophic global heating.

“Our climate is changing before our eyes. The heat trapped by human-induced greenhouse gases will warm the planet for many generations to come,” says WOM Secretary-General, Professor Petteri Taalas.

A report by the UN’s World Meteorological Organisation (WMO) has found that in 2021 sea level rise, ocean temperatures, greenhouse gas emissions, and ocean acidification were all higher than ever before.

The past seven years have been the hottest on record, with 2021 only ‘one’ of the hottest rather than the hottest overall, because of a freak cooling event called La Nina.

WMO, whose report compliments the sixth IPCC report released this year, is hoping to use the findings to influence COP27 in Egypt later this year.

The findings also come ahead of Davos 2022 which will see political and business leaders discussing climate change.

What are the key indicators of climate change?

The key indicators of a changing climate, greenhouse gas concentration, ocean acidification, ocean temperature and sea level rise have all topped previous records in the past year.

Ocean temperatures are at a record high, with the upper 2000m of the ocean continuing to warm in 2021 and expected to continue in the same vein in the future. All the data show that oceans have warmed particularly quickly in the past two decades, a worrying trend considering this change is irreversible.

Ocean warmth has also been found to be penetrating to ever deeper levels, with much of the ocean experiencing at least one ‘strong’ marine heatwave at some point in 2021.

The IPCC concluded that it is likely the ocean is currently more acidic than it has been for at least 26,000 years.

Likewise, ocean acidification has increased due to the water’s absorption of almost a quarter of human-emitted CO2 which is in the atmosphere. The ensuing chemical reaction with seawater creates acidification which threatens marine life and ecosystems, with knock on effects for food security, tourism and coastal protection.

In a double whammy, as the pH of the ocean decreases, its capacity to absorb CO2 from the atmosphere declines. The IPCC concluded that it is likely the ocean is currently more acidic than it has been for at least 26,000 years.

Global mean sea level also reached a new record high in 2021 after increasing at an average 4.5 mm per year over the period 2013-2021, more than double the rate of the previous 20 years.

This change is mainly due to accelerated loss of ice mass from the ice sheets, with major implications for coastal dwellers from New York to Tuvalu.

The global annual mean temperature in 2021 was around 1.11 ±0.13 °C above the 1850-1900 pre-industrial average, less warm than some recent years owing to cooling La Niña conditions at the start and end of the year. The most recent seven years, 2015 to 2021, are the seven warmest years on record.