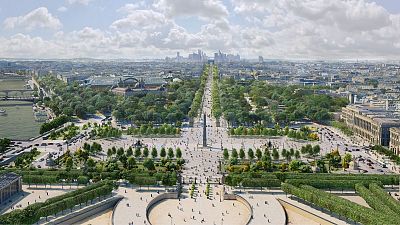 An artist's impression showing the Concorde Square and the Champs-Elysees avenue in Paris   -   Copyright  AFP PHOTO /PCA-STREAM
By Doloresz Katanich  with AFP  •  Updated: 15/05/2022

Paris' famed Champs-Élysées avenue is being turned into an "extraordinary garden" ahead of the 2024 Olympic Games. Despite being known as "the most beautiful avenue in the world", the thoroughfare now resembles more of a highway, with tens of thousands of cars passing by each day. Of late, it's also acted as a central location for strikes, most notably the yellow vest protests.

The works to turn the area into a green oasis will begin "in just a few weeks", according to Emmanuel Grégoire, Paris’ Mayor's first deputy. He announced the start of construction during the meeting for the "official launch of the transformation" of the Parisian avenue.

The works will take place in two phases. The first part starting in May will be completed by the time athletes arrive in the city for the Summer Olympics.

"We are going to redo the Place de la Concorde before the Olympic Games in 2024, then the entire avenue afterwards", promised city mayor Anne Hidalgo in an interview in January 2021.

The most extravagant changes are likely to take a bit longer.

The redevelopment of the Concorde will only happen after the Games, as well as the rest of the transformation of the Champs-Elysées into an “extraordinary garden”. The entire project is scheduled to be completed by 2030.

How is Paris improving the Champs-Élysées?

As a first step, the famous Place de l'Étoile will have a facelift.

Around the Arc de Triomphe, pedestrians will have a much wider space to walk while cars will be limited to a smaller part of the current roadway.

A large amount of renovation is planned along the Champs-Élysées, including fixing damaged sidewalks and benches. Terraces are also going to be redesigned and some 400 trees are going to be planted in the area.

The budget for this first phase of development is €30 million.

A long green promenade planned after the Games

In a second phase, a vast greening of the avenue is planned. 15,000 m2 of additional trees, shrubs and plants are being added in the Champs-Élysées gardens.

A green promenade will stretch from the Louvre to the hill of Chaillot. Pedestrians, bicycles and scooters will take over the majority of the area.

Place de la Concorde and Place de l'Étoile, the gardens of the Champs-Élysées, Avenue Montaigne and Avenue de la Grande Armée are all going to be re-designed.

The Champs-Elysées was first laid out in 1670 but was given a revamp by Baron Haussmann, the architect behind the transformation of Paris under Napoleon III in the mid-19th century.

The new project to green the avenue is designed by architect Philippe Chiambaretta and his agency PCA-STREAM.

Parisians are happy with the revamp idea, with a recent citizen poll reaching 100,000 signatures. Supporters say the level of pollution is bound to get lower, as a big part of the area in the heart of the French capital will now be preserved for pedestrians with an expected 72 per cent drop in traffic.

Watch the video above to learn more about this project.