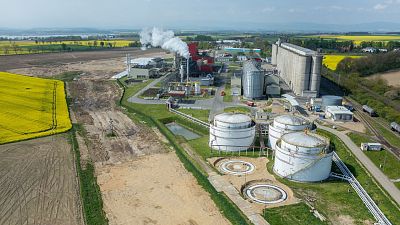 In lush fields outside Paris, farmers are joining Europe's fight to free itself from Russian gas.

Armed with wheat husks, pulped sugar beets and onion peelings, they are about to open a new facility where agricultural waste is turned into ‘biogas’.

It is another green solution aimed at abolishing Europe’s reliance on Russian fossil fuels - a major source of funding behind Putin’s invasion of Ukraine.

“We don't really have a choice,” says Christophe Robin, a local farmer and one of the investors in the Sonchamp biogas plant.

“If we want to avoid the flow of Russian gas, we have to find alternative solutions."

Can the G7 phase out its dependency on Russian oil?

These French farmers aren’t the only people concerned about Europe’s love affair with the Kremlin’s oil.

Last weekend, the G7 club of wealthy nations committed to phasing out its dependency on Russian fossil fuels. It issued a scathing statement, accusing President Vladimir Putin of bringing “shame” on Russia with his invasion of Ukraine.

The announcement from the Group of Seven – featuring France, Canada, Germany, Italy, Japan, Britain and the United States – did not specify exactly what commitments each country will make to move away from Russian energy.

But it represents an important development in the ongoing campaign to cripple Putin’s war machine, and underscores the unity of the international community against Moscow’s actions.

“We commit to phase out our dependency on Russian energy, including by phasing out or banning the import of Russian oil,” said the joint statement.

“This will hit hard at the main artery of Putin’s economy and deny him the revenue he needs to fund his war.”

How is biogas made?

Biogas is already one of the fastest growing energy alternatives in Europe.

On average, three bio-methane production sites are connected to the national grid every week in France alone. Their numbers have surged from just 44 at the end of 2017, to 365 last year.

The fuel is made by fermenting organic materials - generally crops and waste. Robin likens the process to food being left in a container.

"When you open it, it goes 'pouf',” says the farmer. “Only here, we don't open it. We collect the gas that comes from the fermentation.”

After the process is complete, the biogas is purified into bio-methane and injected into the local pipeline, heating hospitals, homes and swimming pools.

The European Biogas Association says the EU could quickly scale up the production of bio-methane, replacing over a fifth of the fossil fuel imported from Russia last year.

An investment of 83 billion euros - less than the European Union pays Russia for natural gas each year - would produce a tenfold increase in bio-methane production by 2030.

“We will be able to contribute greatly to the effort of producing French gas,” says Robin.

“Will we be completely replacing the proportion of Russian gas? I don't think so. There will surely be other solutions. But it is part of the puzzle."

Watch the video above to find out more about biogas production.