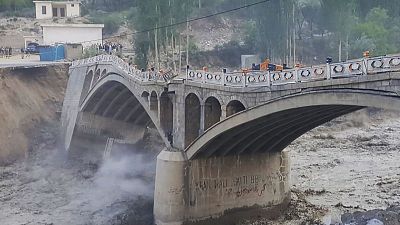 A crucial bridge in northern Pakistan collapsed on 7 May after a glacial lake outburst.

This was caused by a recent heatwave, which released huge amounts of water into the stream and surrounding areas, local media reported.

Experts are saying the water volume at the Shisper glacier lake had increased by 40 per cent over the past 20 days due to unusually high and abrupt temperature rises in the north of the country.

They also added that rapidly melting glaciers have created more than 3,000 glacial lakes in the northern areas and 33 could burst soon. This would send torrents of water coursing through streams, which is very dangerous.

In Hassanabad, local officials helped those affected and ensured that people were not stranded due to the flooding.

“A compact bridge would be temporarily installed to restore traffic,” while construction of a permanent bridge would take about seven to eight months, National Highway Authority chair Muhammad Khurram Agha said, according to Gulf News.

#Shishper glacial lake outburst flood in #Hunza has damaged an important bridge on #KKH at #Hassanabad.

The light transport/traffic has been diverted to alternate route on SAS Valley Road but heavy transport vehicles are not allowed.

Traffic was diverted to an alternate route and heavy transport vehicles were barred.

There has been no loss of life, officials said.