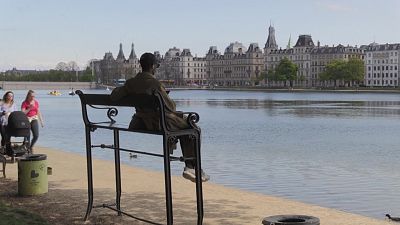 Walking around Copenhagen right now, you might be surprised to see very tall public benches adorning the streets. And what makes it even more peculiar is that a TV channel has installed them - but not for filming.

The benches are raised 85cm higher than normal city benches, but why?

"According to the UN, the global sea level will rise up to one metre before the end of the century and that will also have a great impact on Denmark if we don't act now,” says Kasper Adsbøll, a senior brand manager at television channel TV2.

‘The Copenhagen Bench - 2100 Edition’ is part of the channel’s ‘Our Earth - our responsibility’ campaign. The project aims to make the public think about climate change and the danger of rising sea levels.

Each of the ten benches around Copenhagen is fitted with a copper plaque which reads: ‘Flooding will become part of our everyday life unless we start doing something about our climate. According to the latest UN Climate Report sea-levels are expected to rise up to 1 metre by 2100 if global warming continues.’

Denmark, and Copenhagen in particular, is a very low-lying region. Parts of the capital are only a few metres above sea level, leaving it exposed to the immediate impact of rising water levels.

Watch the video above to learn more about Copenhagen’s tall benches.

How can cities better prepare for the extreme heatwaves in Europe?