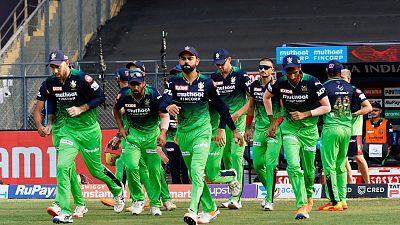 It’s hard to think of a sport that asks players to be in the direct heat for as long as cricket.

But as the worst heatwaves in 100 years break across India, the country’s annual cricket tournament is powering on.

Those who have no choice but to work outdoors - like rickshaw drivers or gardeners - are at the greatest risk of illness and death in these conditions, not professional athletes.

The extreme heat, however, is moulding tactics in the Indian Premier League (IPL), the world’s sixth-biggest sports league. Whichever team wins the toss on weekend games - which start at 3.30pm - is sure to choose to bat first, sparing its men a brutal afternoon fielding under the sun.

Most matches are being played in and around Mumbai, away from the record-resetting temperatures in the northern districts and Pakistan over the last few weeks.

But in a sign of how far the heat has permeated the bubbles of the ten IPL teams, Royal Challengers Bangalore (RCB) cricketers linked their decision to wear a green jersey during yesterday’s match with the scorching statistics of recent weeks.

“Climate change is on our doorstep, and it’s our responsibility to take care of the only planet that we call home,” legendary batter Virat Kohli said in a video shared on Twitter before RCB’s winning game on 8 May.

The mercury is set to climb to 47C in New Delhi again this weekend, lingering in the mid-30s in Mumbai. So how is the game coping with this sweltering heat ahead of the IPL final on 29 May?

How are the heatwaves shaping tactics in the Indian Premier League?

It rests on the toss of a coin, but choosing to bat first has become an obvious tactical choice in the IPL.

Keeping 11 of your players from being “completely cooked” for the second half of the game makes sense, RCB analyst Freddie Wilde tells Euronews Green, but it also helps lift morale.

The coastal city has avoided the worst of the heat this year, but many of the players still recall a scorching day when they played against Chennai Super Kings last year.

“Apparently that was just unbearable and it completely broke the players,” says Wilde. “The fear that that might happen again is always on your mind.”

You could see players retreating into the shadows, even if it wasn’t in the fielding position they were meant to be in - it was that hot.

Players changed shirts three or four times during that fielding innings, which lasted around 90 minutes. In breaks, the twelfth man - the reserve player who usually brings out water - came running with ice packs.

Even so, “you could see players retreating into the shadows [cast by the stand], even if it wasn’t in the fielding position they were meant to be in - it was that hot,” Wilde says.

Batters in Test matches - which run for up to five days, as opposed to the quicker-paced 20 overs format of the IPL - have to endure longer stints under the sun.

One player told Wilde of a grueling match he’d played in Pakistan around two years ago. The batter - made delirious by heat - flagged down a twelfth man for water who, it turned out, was actually a security guard.

Keeping hydrated is, in all seriousness, key to beating the heat. But the critical hydration for the RCB players comes well in advance of the game. Their drinking is monitored 24 hours before stepping out, under the watchful eyes of physiotherapists and doctors.

How is the climate crisis impacting cricket?

From India to South Africa, Bangladesh to the Caribbean, cricket-playing nations are suffering the new extremes of heat, drought, sea-level rise, and storms that our greenhouse gas emissions are unleashing.

Few sports are so finely attuned to climate, in the way it skews a pitch; altering the amount of grass, the humidity of the air, the performance of the people playing it. And sometimes the impacts of climate change cross a safe boundary.

During the 2018 Ashes Test in Sydney, England captain Joe Root was taken to hospital after batting in a helmet and pads through 47C heat. The Delhi air pollution in December 2017 left Sri Lankan fast bowlers vomiting on the side of the field.

At other times, the crisis that a country is going through renders sport unimportant. In January 2020 - as bushfires raged through Australia - players donned black armbands to honour the emergency services risking their lives to save people from the furnace.

How can cricket be part of the climate solution?

Waiting for the evening dew to bowl is one small tactical decision that teams can take. But what bigger manoeuvres are national cricket boards and the International Cricket Council (ICC) making to avoid the worst impacts of climate change?

The ideas for how the sport can adapt to these extremes in weather are already there. The 2019 ‘Hit for Six’ report from the British Association of Sustainable Sport (BASIS) made key recommendations for ensuring the welfare of players, umpires and fans at all levels of the game. These range from wearing shorts to setting heat rules, with specific guidelines for youth players who are “less able to regulate [their] body temperatures.”

In a different league altogether is the suggestion that the ICC set up a global climate disaster fund to support communities in vulnerable regions. There’s no indication of this being acted on yet.

The lip service paid to climate action can ring hollow when compared to the clout and funds of organising bodies like IPL sponsor TATA, India’s largest conglomerate. TATA Steel, a ‘child’ company of the group, is one of the top CO2 emitters in Europe.

Still, there’s no doubt that cricket has the ear of its fans in a powerful way, and an ability to sway public discourse.

Cummins is one international cricketer using his platform, and the diagnosis of his sport to make the case for a wider cure.

“Like all Australian athletes, we cricketers try to punch above our weight on the world stage. And with the incredible resources we have to hand, we want to do that on climate too,” he wrote in the Guardian.

“Few countries in the world can match Australia’s extraordinary potential to generate renewable energy like solar and wind power – we think this is a win-win for our game and for the environment.”

As such, Cummins has co-launched Cricket for Climate - a movement to get all Australian cricket clubs to achieve net-zero emissions over the next decade.

On this front, there’s no competition between players. Especially given the gulf in responsibility between historic emitters England and Australia and cricket-playing countries in the Global South.

But there’s a growing sense that on whatever stage cricket is played, it can’t help but shine a light on the climate crisis.

Whichever team lifts the trophy at the end of this month, it’s clear it will soon be worthless without quick and meaningful wins for the planet too.