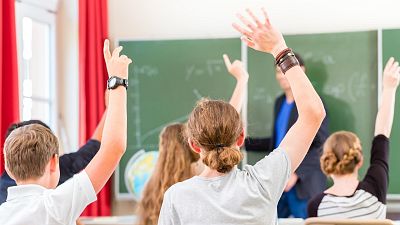 From 2025, some UK students will have the option of taking a new sustainability GCSE focused on climate chage   -   Copyright  Canva
By Charlotte Elton  •  Updated: 22/04/2022

Did you learn much about climate change at school? For many people - including the supposed climate experts in our team - the answer to that question is no.

But for some UK students, the future looks much brighter. From 2025, 14-16 year old pupils will have the option of taking a new natural history GCSE focused on protecting the planet.

Climate change is already incorporated into the curricula for geography and science in England as both are compulsory subjects up to the age of 14.

But in reality, it’s often left out of teaching.

According to 2021 research from the campaign group Teach the Future, 71 per cent of educators feel they don’t have enough training to talk to students about climate change.

41 per cent of 500 teachers said climate change was rarely or never mentioned in their schools.

Meanwhile, climate anxiety amongst teenagers has rocketed to record levels.

Ill-equipped teachers clearly aren’t able to help students deal with the emotional strain of the climate crisis - or inspire them to take action for change.

The Euronews Green team are an eclectic bunch. They went to school all over the world and were educated in the 1990s and early 2000s.

So with UK Education Secretary Nadhim Zahawi expected to outline details of the new GCSE course tomorrow, here’s what the team were - and weren’t - taught about the climate crisis, and what they think today’s students need to know.

We didn’t learn about climate change in any meaningful way. I dropped geography when I was 13 and biology when I was 16 - i.e. the earliest I could drop both subjects. Neither subject felt relevant or important - despite the fact that as an environmental journalist now I would say they are two of the most important subjects of all. There was a lack of urgency or real-world applicability with either subject, and so I never really felt a connection with them.

I think climate change should be taught but I think we need to be careful. Firstly, I think environmentalism should be taught overall. Because there’s no point fixing the climate crisis if we aren’t also going to fix the biodiversity and nature crisis. Both are crises and both are urgent, so this entire interconnected web needs to be taught.

However, I strongly feel (as a former teacher too) that we need to be sensitive with how it’s taught. Eco-anxiety sounds like a silly internet phrase sometimes, but it’s real, it’s serious, and it’s genuinely leading to suicides among young people. If we teach young people about these huge impending (and current) catastrophes, we’re instilling a sense of hopelessness that is both unhelpful in tackling the problems and harmful to students.

I listened to an amazing podcast where three Rabbis were discussing how we teach health to children when they’re young. We talk about positives, not negatives. When we teach young kids, we would never say ‘if you do x, y, z you’re at risk of developing cancer and ultimately dying’ -– we say things like ‘eating healthily and moving your body makes you feel good’, everything is framed through a positive, active and participatory lens. I think that’s how we need to start teaching the climate and nature crises too. We can’t jump in with doom and gloom (especially when there is a lot of hope), but explain the importance of ecosystems, why clean energy is important etc.

We were taught very little outside of the nuts and bolts science behind global warming. There was some information about ecosystems and the impact of deforestation in Geography lessons at secondary school, but I didn’t take the subject as a GCSE so it was optional to continue learning about it past the age of 14. If there was more then it wasn’t memorable enough that it stuck with me later in life.

Climate justice is a topic that I feel was severely lacking as part of my education. What I did learn about climate change was either highly theoretical or focused on the impact on wildlife and animals.

People in the Global South are suffering from the impacts of global warming right now through droughts, extreme weather, famine and rising sea levels.

Speaking to people from these communities as a climate journalist has been one of the most eye-opening aspects of my job. Their experiences should definitely feature prominently in school curriculums.

I had a fairly unusual education. I went to a primary school in England until I was 8 years old, then we moved to China and the rest of my schooling was at international schools in Asia and Europe. Despite this geographical spread, I don’t remember learning anything about climate change. That phrase was certainly not used. I did learn about what the environment is, but that’s pretty useless knowledge on its own.

I do remember being taught the importance of recycling. Pretty much everyone knows that now, which is progress I suppose.

I think today’s students should be educated in how global warming works, the main causes of it and what needs to change for the worst impacts of climate change to be mitigated. That way, they could understand the political and economic structures that are in part to blame for the climate crisis - and how they can change the status quo. We need all of them to be an activist of some kind, after all.

I wasn’t taught about climate change at all.

I’m surprised all the time by things I wasn’t taught. The amount of plastic that gets back to our bodies is mindblowing. Millions of tonnes of garbage is piling up in landfills, yet we still have no idea what happens to it once it’s taken away and what a danger it can still be to us.

I have a teenage stepdaughter who has absolutely no idea why Shein is a no no. That should be a must in schools - shopping must come with responsibility.

I think it would be great for people to learn more about embodied energy - the environmental impact of production and the transportation of products.

I grew up in a rural area (we even had a school farm) so it would have been really interesting to learn more about meat vs local meat vs imported foods and their impact on the environment. I became veggie when I lived in London because I thought it was best for the environment. Now I live in the countryside I’m a bit more flexible, because I can buy meat that was raised less than a mile from my house.

I was taught some of the basics in geography class in secondary school. I remember being taught about the greenhouse gas effect and the hole in the ozone layer. So we were given an understanding of global warming and the basic science behind it.

I also remember in primary school that there was an environmental committee and I was ‘voted’ onto it when I was around 8 years old. And my school was very proud of its green flag which was given to schools for “promoting long-term, whole-school action for the environment.”

However it was only when I went to university and took a module in environmental politics that I learned about the root causes of climate change, how the effects of climate change usually fall along the lines of inequalities and the true scale of what the world is facing.

I think when I was in school I wasn’t aware of the urgency of the climate crisis. In a way this was a nice thing, as it was not something I worried about - ignorance is bliss. Even though I left school only seven years ago things have changed quickly with regards to young people’s awareness of climate change. It seems most teenagers are more clued in to what is going on and the consequences of it than I was at that age. So I think I would have liked to have been taught about the scale of climate change. I also would have liked to have been taught about Ireland’s poor climate performance. We rank among the worst in the EU in this area, but that’s something I have only learned in recent years.

I remember being part of school recycling teams from as young as seven or eight, but wasn't taught the wider context for 'eco-friendly' initiatives like these.

My path to climate journalism has been a gradual one, and I don't know if I'd have jumped at a Natural History GCSE aged 14.

Looking back, I wish there'd been a subject that brought together climate change as a holistic issue, and natural history is a great place to start. People are often divided into 'art' and 'science' camps from a young age, and I think this GCSE would have helped bridge the two, and pave the way for all kinds of careers in conservation, ecology, wildlife filmmaking and climate journalism, for kids who felt at odds with the more 'mathsy' sciences.

Another thing I wish I'd been taught - and try to teach myself as I go along - is the history of energy.

Greta Thunberg is publishing a handbook for tackling climate change

Eco-conscious students are protecting their future by refusing to fly