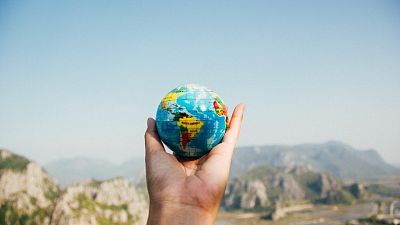 This week on 22 April, the 52nd annual Earth Day will be celebrated across the world.

The Day was founded in 1970 in the US by a senator from Wisconsin who organised a national demonstration to raise awareness of environmental issues. It became the single largest protest in human history with more than 20 million people taking to the streets.

Now events around the world bring together 1 billion people in more than 193 countries to protest, care for the environment and take action on climate change.

And this year the theme for Earth Day is ‘Invest in Our Planet’ with the event’s website stating that “this is the moment to change it all.”

With all that is happening in the world right now, warnings of climate disaster and impending doom, it can be hard to find hope for the future of the planet. So to celebrate - and inspire you to take action - we’ve rounded up some of our favourite green heroes we’ve spoken to so far in 2022.

In southeast Brazil, the pet trade has put two kinds of tiny mountain monkeys at risk of extinction.

Already pressured by the rapid disappearance of the Atlantic Forest, invasive marmoset species brought in from other parts of the country are causing issues. They compete for habitat, food and crucially mates.

Hybrids between the different species could cause the unique genetics of the mountain marmosets to disappear altogether. Now experts in the region, including founder of the Mountain Marmoset Conservation Programme Rodrigo Salles de Carvalho, are trying to bring them back from the brink of extinction.

Euronews journalist Rosie Frost spoke to people on the ground in Brazil to find out how they plan to save these increasingly rare animals.

Along a stretch of the Tuscan coast near the town of Talamone, stone sculptures litter the seabed. But these marble works are more than just pleasant pieces of art, they were put there by fishermen worried that harmful practices could wipe out the region’s marine life.

Paolo Fanciulli has fished off the coast of Tuscany, Italy, for more than 40 years. In the late 1980s, he started to notice the unmistakable signs of illegal trawling and felt compelled to act.

“They were devastating the sea and my way of life,” Fanciulli tells Euronews. “If the sea dies, so does the fisherman. You can’t just take, you have to give too.”

By using art as an avenue for the protest ‘House of Fish’, an underwater sculpture park was born.

Rebecca Ann Hughes spoke to Fanciulli to find out exactly how these marble carvings are stopping illegal trawlers in their tracks.

A 17-year-old activist fighting the Australian government in court

Anjali Sharma is one of eight students who got the Australian courts to recognise that the government had a duty to protect children from climate change.

Last month, they lost the case on appeal by the Environment Minister and this responsibility to young people, which they had worked so hard to establish, was overturned.

Despite this, Sharma and her fellow climate justice advocates are not backing down. They say this fight is just the beginning and, if anything, it shows how Australia has become the “climate pariah of the world.”

Here she writes for Euronews Green about her journey so far and the hateful responses she has received since the climate case was dropped.

During the Second World War, the Women’s Timber Corps stepped in to replace men serving in the armed forces. Up to 13,000 females served at their peak in 1943 but, after the war, there was little recognition of their work.

Now the ‘lumberjills’ are making a comeback and around 40 per cent of the Forestry Commission’s workforce is female. Helen Bralesford, 59, has learnt to use a chainsaw since she started volunteering with the National Forest Company and the Woodland Trust.

“I grew up in an era and place where women were still being told to take cookery, needlework, childcare and maybe, if they were clever, typing to become a secretary.”

But, she says, the industry training she received was invaluable, helping her to have more confidence in other parts of her life.

Catherine Lofthouse spent a morning felling trees with these modern-day lumberjills to discover why more women than ever are taking up forestry.

The man skiing with Eagles to rewild the French Alps

At the ski resort of Morzine, one man is on a quest to rewild eagles in the French Alps. The white-tailed eagle has been missing from the region for 130 years but Jacques-Olivier Travers is hoping that will soon change.

The bird of prey enthusiast is drawing attention to this conservation issue in a unique way - by skiing alongside these majestic animals. Long believed to be a threat to local livestock, Travers is hoping to change people’s opinions by sliding down the slopes accompanied by Fletcher, his white-tailed eagle.

“When they see the eagle flying with me, people realise it's not dangerous,” says Travers.

“Everybody knows Fletcher and everybody knows about these birds. It's a nice story, and I know how important it is to tell a story.”

Euronews journalist Ben Anthony Horton travelled to Morzine to meet Travers and find out how he is sharing his passion for this species.