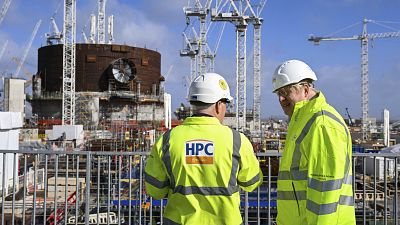 The UK announced its new energy strategy on Wednesday, disappointing environmental campaigners and enraging politicians who believe the British government missed the chance to cut soaring bills for UK families.

The new energy security strategy includes plans for the development of eight new nuclear reactors and promises an ambitious expansion of nuclear, wind, solar and hydrogen. While at the same time allowing the country to continue drilling in the North Sea for gas and oil.

What are the main points of the new energy strategy?

First of all, we should talk about nuclear energy.

In an effort to cut ties with Moscow and halt energy imports coming from Russia, the UK government is betting on nuclear energy to achieve energy independence.

With eight new stations, the UK government is hoping nuclear power will satisfy 25 per cent of electricity demand in the country. The Department for Business, Energy & Industrial Strategy described nuclear energy as a “safe, clean, and reliable source of power.”

It has been confirmed that none of the new nuclear stations will be in Scotland.

In its drive towards cleaner energy, the UK also announced plans to accelerate the approval of new offshore wind farms from four years to one, with the ambition to generate up to 50GW by 2030 from these new turbines.

The country is also counting on solar and hydrogen to reduce its reliance on gas. The government has announced it will consider new rules for installing solar panels on homes and commercial buildings, with the aim of increasing solar capacity by five times by 2035.

By the same year, the government plans to double hydrogen capacity to be used for power, transport and heating.

Some £30 million (€35.9 million) will be invested in heat pumps to reduce the demand for gas.

An “impartial” review will be launched to investigate whether fracking - the controversial practice of drilling deep into the ground to mine for oil and gas - is safe.

While willing to overcome its reliance on Russian fossil fuel imports, the UK is not quite ready to give up oil and gas entirely.

The plan announced new licenses for oil and gas explorations in the North Sea, justifying the controversial decision as a recognition of “the importance of these fuels to the transition and to our energy security, and that producing gas in the UK has a lower carbon footprint than importing it from abroad.”

The UK government said this new strategy will create 40,000 green jobs and allow the country to use electricity that will be 95 per cent low carbon by 2030.

However, the plan failed to impress environmentalists and climate experts, who denounced the absence of insulation in the government’s strategy. Environmental activists have long campaigned for the inclusion of insulation, which is widely considered the cheapest and quickest way to save on energy while also lowering emissions.

As much as this new strategy has been quite a disappointment for environmental campaigners, the new plan is even more of a letdown for people in the UK - especially those already hit by inflation and skyrocketing energy bills.

How will this new strategy affect energy bills?

The new strategy might help the country achieve energy independence, but it certainly won’t help people in Britain pay their bills.

The government is the first one to admit this: business secretary Kwasi Kwarteng told Sky News: “You are right to say that the strategy is more of a medium-term, three, four or five-year answer,” he said. “But that doesn’t mean that we can’t address this,” he added.

Since the beginning of the war, energy prices have risen from 15 per cent in February to 20 per cent in March, a cause of major concern for both businesses and households, as reported by the UK’s Office for National Statistics (ONS).

On 1 April, the energy cap in the UK increased by a staggering 54 per cent for about 22 million customers, according to energy watchdog Ofgem, meaning people affected will see an increase in bills between £693 (€830) and £708 (€848) according to their paying system.

“We know this rise will be extremely worrying for many people, especially those who are struggling to make ends meet, and Ofgem will ensure energy companies support their customers in any way they can,” said Jonathan Brearley, chief executive of Ofgem.

A quick win would have been to insulate buildings and homes, as many have called for in the past few years, and even more so since COP26 in Glasgow.

The former head of Ofgem, Dermot Nolan, told BBC Radio 4 on Thursday that boosting nuclear capacity will take a long time to have an impact, while insulation would have improved the quality of people’s homes while achieving energy efficiency “in the short to medium run.”

Labour climate change secretary Ed Miliband denounced the lack of insulation in the government’s strategy, saying that the Tories had failed “to help people cut their bills with an urgent energy insulation programme.”

He called the new strategy “a total betrayal of families and pensioners across the UK.”

Asked about the new energy strategy, opposition leader Keir Starmer said the new plans “won’t help those who only last week saw their energy bills go up by hundreds of pounds”.

He told the media that the new strategy “leaves out of account really important initiatives like keeping homes warm, insulating homes, which I’ve seen for myself can make a huge difference and reduce bills by up to £400 (480), that’s the sort of real action we were looking for today”.

What the 'landmark' plastic pollution treaty could mean for the planet