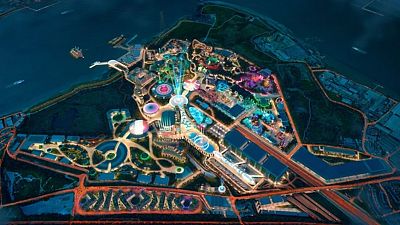 A colossal theme park on the outskirts of London has been derailed, in a temporary victory for environmental campaigners.

Plans for a park big enough to rival Disney - covering land equivalent to 136 Wembley Stadiums - have been in the works since 2014, and a planning application hearing was due to start today.

But the London Resort company announced it is withdrawing its current application for the park on the Swanscombe peninsula on the Thames in North Kent - an area that was designated a ‘site of special scientific interest’ (SSSI) last year because of its exceptional range of wildlife.

“If the London Resort development goes ahead, it will be one of the largest ever single losses of nationally protected habitat in the UK,” Nicky Britton-Williams of Kent Wildlife Trust told Euronews Green.

Otters, water voles, marsh harriers, spoonbills and numerous orchids are among the flora and fauna living on this peninsula. Less endearing to the British public but of no less importance is a critically endangered species of jumping spider, only 1cm long and capable of leaping more than 10 times its length to catch its prey. The site near Gravesend is one of only two places where it now dwells.

The construction of the London Resort will likely result in the extinction of many rare species.

“By concreting over this treasure trove of biodiversity and abundance, we will lose an urban oasis of incredible wildlife – home to species that range from jumping spiders to marsh harriers,” adds Britton-Williams. “The construction of the London Resort will likely result in the extinction of many rare species and local people will lose access to this nature-rich gem.”

London Resort said this morning that a new application for the site will be made later in 2022.

Is it possible to create a carbon-neutral theme park?

London Resort Company Holdings (LRCH) insists that sustainability is at the core of its vision, as it aims to create one of the world’s only carbon-neutral theme parks.

“We have an ambitious plan, which is, operationally, we want to be carbon neutral, which obviously has a cost on construction, on our entire value chain,” chief executive Py Gerbeau said two years ago, adding that this approach was important to win over younger Gen Y and Gen Z customers.

Solar panels and other renewable and ‘low carbon technologies’ would power the themed rides, water park, hotels and other features, under a partnership with EDF Energy.

A London Resort spokesperson told the Guardian that it is committed to investing £150 million (€178 million) to enhance the habitat. This is despite the company having previously objected to the peninsula being granted SSSI status. “Huge parts of the land are contaminated,” he said. “It is largely a brownfield, former industrial site which has been unmanaged, with zero investment for improvement, for decades.”

Approving London Resort will set a precedent: our most precious wildlife sites can be destroyed in the name of a theme park. We cannot let this happen.

But Kent Wildlife Trust contests this image. The charity describes Swanscombe Peninsula as a site which has been “rapidly reclaimed and recolonised” by nature, creating a great diversity of habitats.

“Approving London Resort will set a precedent: our most precious wildlife sites can be destroyed in the name of a theme park,” adds Britton-Williams. “We cannot let this happen.”

How likely is the London Resort to be approved?

As the theme park is being proposed as a ‘nationally significant infrastructure project’ (NSIP), final approval rests with the UK government, rather than local authorities. It is the first commercial project to be given this designation, which is usually reserved for big infrastructure projects, airports, power plants or major roads.

The Planning Inspectorate was due to start preliminary hearings today, 29 March and 30 March, and had previously expressed doubt that plans would be ready to review in time.

The peninsula’s SSSI status has thrown a spanner in the works for the developers; while Tilbury port’s new classification as a ‘freeport’ means the London Resort has had to move its planned ferry terminal and transport links elsewhere.

"These changes are considered material and as such require withdrawal and resubmission," Gerbeau said.

In response to the news, Kent Wildlife Trust says, "Whilst we are pleased that the London Resort have withdrawn their application, we need to recognise that this is not the end of the fight to save the Swanscombe Peninsula.

“The London Resort says that they will be submitting a new application before the end of 2022. What this means is that we must call on the government to not only uphold its commitments to tackle the nature and climate crises but also to look at what needs to change in the NSIP process to prevent our most precious wildlife sites from being at risk of being concreted over.”

Over seven years since plans began, continued delays and uncertainty around the Disney-esque resort are having a significant impact on the capacity of the wildlife trust and other local groups.