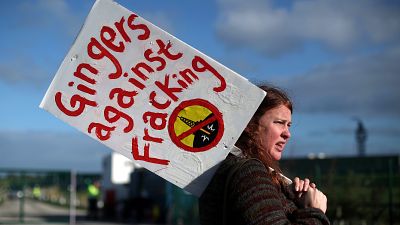 A protester stands outside Cuadrilla's Preston Road fracking site near Blackpool in 2018.   -   Copyright  Hannah Mckay/REUTERS
The opinions expressed in this article are those of the author and do not represent in any way the editorial position of Euronews.
By Jenny Medlicott  •  Updated: 29/03/2022

The UK is currently facing the worst cost-of-living crisis of the twenty-first century, according to Martin Lewis. Energy prices are rising to astronomical levels and many are frantically searching for a solution to offset the costs.

A collection of Conservative Party MPs, calling themselves the Net Zero Scrutiny Group (NZSG), are fighting for the return of fracking, supposing it could be the UK’s answer to the energy crisis.

But this returning conversation has been met with distaste and dispute, as if successful, it would spell disaster in the global climate emergency.

Why do the Net Zero Scrutiny Group support fracking?

Speaking to Craig Mackinlay MP, the head of NZSG, he thinks the government ought to reconsider their ban on fracking. “It’s coming to the fore again as to whether the moratorium should remain in place and whether it’s at all fair that the shale gas industry has to comply with a 0.5 on the Richter scale limit”.

“We seem perfectly happy to accept shale gas from the US, but don’t seem to want to go up that route ourselves. And at a time of intense energy insecurity, which was there before but now obviously with the Russia-Ukraine war it’s really showing itself; I think perhaps we need to just have a look at this again”.

Mackinlay shared that he is currently in talks with Cuadrilla about the remaining fracking sites in Lancashire, and that he has raised the question of whether it’s sensible to seal the sites for good.

When asked about the claim that it would take years before gas could be produced on a commercial basis even if the fracking moratorium were lifted, he rebutted this, arguing that he didn’t think it was true.

“The big delays are with the planning delays, because we have such a complex planning system […] if they had the free reign to do it, I think you could have gas coming out of these places within 12-14 months”.

Mackinlay believes fracking is the cheapest current option and that producing gas on a domestic scale would have less of a carbon footprint than importing it halfway around the world on LNG ships.

“I don’t care where energy comes from, I just want it to be cheap and reliable […] we haven’t solved the intermittency of renewables, that is the big bit of the puzzle”.

While he supports projects such as insulation and net-zero homes, he doesn’t think most renewable choices are an option right now. “There will be a eureka technology one day, but we’re not there yet”.

Moving away from our reliance on gas

However, environmental campaigners want to move away from gas dependency altogether.

Acting campaign director Jamie Peters at Friends of the Earth said, “more gas and oil production isn’t the answer to the energy crisis, instead our reliance on it is the root cause”. “Fracking isn’t the solution either, it is not wanted, not needed and not feasible. Huge opposition to it remains across the country.”

In contradiction to Mackinlay’s comment, Peters further added, “new gas and oil licences would take years to come into effect and won’t have any meaningful impact on soaring energy prices – as UK business minister Kwasi Kwarteng recently acknowledged - while sending more emissions into our atmosphere during a climate emergency.”

Rather than solving the cost of the energy crisis, we should be focusing on the reduction of energy demand altogether.

“The UK is sitting on a gold mine of cheap, almost limitless homegrown renewable energy. Developing this must be the focus of the UK government’s forthcoming energy strategy," adds Peters.

“An urgent and properly funded nationwide insulation programme would not only help fix our heat-leaking homes, it would help reduce fuel bills too.

“Countries across the planet are facing the twin challenges of rising energy prices and a climate crisis that is already having dire consequences around the world. They must ignore the crass and opportunistic siren voices of the fossil fuel industry and their allies and leave gas, coal and oil in the ground where they belong.”

Kwasi Kwarteng, the Secretary of State for Business pointed out himself, “UK producers won’t sell shale gas to UK consumers below the market price.”

Any time spent on fracking is time and money that could be instead invested into improving renewable energy resources.

The reality is that shale gas would never be sold to the public at affordable rates.

Gas and oil dependency is harmful regardless of where it originates from and is always sold with profit in mind, moving away from it altogether is the only real way to produce a win-win situation for society as well as the climate.