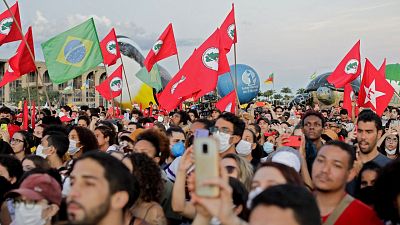 People attend Brazilian musician Caetano Veloso's performance during a demo in defense of Earth and the environment and against the environmental policies of Bolsonaro.   -   Copyright  AFP
By Maeve Campbell  with Reuters  •  Updated: 10/03/2022

The President's new bills would weaken environmental protection of the Amazon and allow mining on Indigenous lands.

The "Earth Event" was called by popular singer Caetano Veloso and three dozen other Brazilian musicians to call on legislators to stop the destruction of the Amazon rainforest.

Indigenous people wearing feathered headdresses, students carrying banners against the use of pesticides in agriculture and children dressed as bees mingled in the crowd under a giant inflatable capybara and a penguin.

Dressed as a tree, a university professor said Brazil's environment was endangered by the expansion of farming.

Dressed as a tree, university professor Priscila Borges said Brazil's environment was endangered by the expansion of farming and a government serving the interests of agribusiness.

"The situation is critical, this government is destroying what is left of our forests," she told Reuters.

What would the new bills mean for the environment in Brazil?

The legislation opposed at the rally includes a bill that will grant an official pardon to land grabbers that have for decades illegally invaded lands belonging to the government or traditionally inhabited by Indigenous communities.

Other bills would weaken the requirements for environmental licensing and increase the number of pesticides and herbicides that farmers can use.

Brazil is at a crossroads. Amazon deforestation is out of control, violence against Indigenous people has increased.

A fourth bill would allow mining and oil exploration on Indigenous reservations that are protected by the Constitution. The government hopes to fast-track  this one through Congress, arguing that the Ukraine war has disrupted supplies of fertilisers needed for grain crops.

Veloso and other musicians met with the head of the Senate, Rodrigo Pacheco, to ask for his help blocking the bills.

"Brazil is at a crossroads. Amazon deforestation is out of control, violence against Indigenous people has increased and environmental protections have been undermined," Veloso said.

"Our international credibility has been devastated," he said.