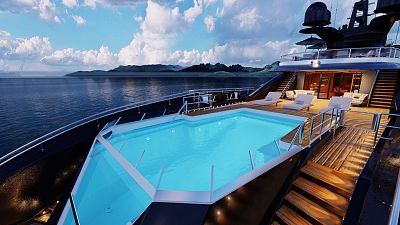 As one of the most highly prized hardwoods in the world due to its finish and durability, teak is becoming increasingly popular with the mega-rich.

It's one of the best-known timbers and hails from the tropical forests of Indonesia and Myanmar - which are the world's largest suppliers.

But since the military seized power in 2021 and the EU imposed economic and trade sanctions, the teak trade has been pushed underground.

Why is teak so special?

Teak's durability and robustness make it especially popular for the decks of yachts, which is why it has such an enormous price tag.

But for the clientele who own luxury yachts, money is not an issue. It's all about prestige.

Teak's durability makes it especially popular for the decks of yachts, which is why it has such an enormous price tag.

So of course, the profit margins for teak dealers are high. And while EU imports are prohibited if legality and sustainability cannot be proven, the sought-after timber still finds a way onto the continent.

How is timber from illegal logging getting to the EU?

The European Timber Regulation, which was meant to reduce illegal logging, came into force in 2013, to ensure that no illegal wood can be sold in the EU.

It prohibits operators in Europe from placing illegally harvested timber and products derived from illegal timber on the EU market. ‘Legal' timber is defined as timber produced in compliance with the laws of the country where it is harvested, as stated on the website of the European Forest Institute.

To make sure that all necessary rules are followed, the regulation requires operators who are placing timber on the EU market for the first time to exercise ‘due diligence', for example with documentation and verified papers. However, this process depends on the national laws of each country, meaning that a pan-European procedure does not exist.

Faith Doherty, who works for the Environmental Investigation Agency (EIA), knows there is no legal way to import Burmese teak.

Before the military coup in Myanmar, there were laws in place to help with sustainable logging and sustainable trade.

“Before the military coup in Myanmar, there were laws in place to help with sustainable logging and sustainable trade,” she says.

“One of the basic things was the annual allowable cut. So how much you can log and where. From our monitoring and documentation, we could say that this was never really adhered to.”

This raises suspicions within the EIA as to how the current system is working, as there is currently no transparency or independent verification.

According to the EIA, illegal timber from Myanmar makes its way via China to the borders of the EU where it is imported to Italy, Croatia or Greece.

In Germany, the Thünen Institute in Hamburg takes samples of imported timber and genetically tests them. The institute has one of the largest collections of wood samples in the world and can genetically compare them to discover where they originated from.

This method has its limits though. If the timber was cut on the border between legal and illegal territory, it’s impossible to distinguish the difference.

"Genetics doesn't stop at the border. The colleagues from the Institute of Forest Genetics only detect a difference at a distance of approx. 50 to 100 kilometres," says Gerald Koch, from the Thünen Institute.

Not all types of wood can be tested either.

"In Germany alone, we have approx. 20,000 registered market participants. Not every wood product can be tested. After all, it's not just solid wood, but also wood-based materials, fibreboard, paper and finished furniture," he told Euronews Green.

"Wood is also processed into musical instruments, children's toys, tool handles and charcoal. These, again, are not subject to the EUTR so far."

Logs are also mixed up in stockpiles, according to Doherty, and their markings don’t necessarily reflect their origins, making identification difficult, if not impossible.

It’s not just the mega-rich who are using illegal teak...

"It is clear that teak has been used for this yacht. We are not yet sure about its origin“, says Thomas Chung from EIA.

“But we know that Oceano has used teak from Myanmar in the past.“

However, it’s not just the mega-rich who are using teak, governments are involved too.

For the renovation of their military training ship, the Gorch Fock, Germany imported teak from Myanmar, which did not comply with either the Federal Procurement Directive or the requirements of the EUTR, as stated by WWF.

WWF has filed a complaint with the European Commission. In response to queries, the Federal Agency for Agriculture and Food (BLE), which is responsible for controlling timber imports into Germany, replied as follows: "The imports in question were made between 2015 and 2017. It was only in 2017 that the discussion about EUTR compliance of imports from Myanmar arose."

Chung is far from satisfied with this response: “Since it is already here, we might as well use it. This is an outrageous position,”

“Could you imagine if this was a pile of ivory? The outcry would be huge. But timber is always perceived as a replenishable resource which is only partially true.”

What are the possible solutions?

The only way to protect Myanmar’s teak, according to Gerald Koch, is to put it on the list of the Washington Convention on International Trade in Endangered Species (CITES). But, he says, this will only work if Myanmar cooperates.

"The military dictatorship will not support that because it sees teak as an important source of foreign currency."

Another option, he says, is the monitoring of logging areas with GPS, satellites, and drone technology.

Currently, the EU is working on the so-called supply chain law to better curb the import of illegally logged timber. But here, too, all European countries would have to cooperate for change to take place.

The production of this investigation was supported by a grant from the Investigative Journalism for Europe (IJ4EU) fund.