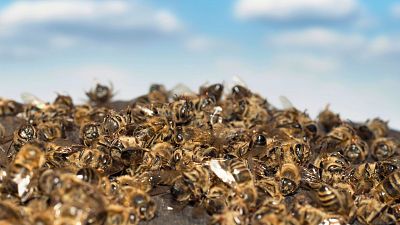 Bees and other pollinators play an essential role in ensuring biodiversity and a healthy ecosystem.

They are essential in the reproduction, and therefore survival, of many plants which, in turn, serve as food and shelter for a variety of animals.

They are also critical to our food security, providing vital human nutrition. In the past 50 years, there has been a 300 per cent increase in the volume of global agricultural production dependent on pollinators.

The real importance of pollinators

“Without bees, we would be unable to produce much of the food we take for granted,” according to Barnaby Coupe, Land Use Policy Manager at The Wildlife Trusts.

“From everyday staples such as broccoli and apples through to seasonal treats like strawberries - a third of total food production is dependent on insect pollination,” he adds.

From everyday staples such as broccoli and apples through to seasonal treats like strawberries - a third of total food production is dependent on insect pollination.

But sadly, these buzzing pollinators are in decline.

They have been hit hard by the loss and fragmentation of the habitats they depend on, such as wildflower meadows and hedgerows, Coupe explains. Crucially - this includes the widespread and unnecessary use of toxic pesticides.

Granting ‘emergency’ use of bee-killing pesticides

Extensive use of agricultural pesticides play a major role in the decline of pollinators, which have suffered severe losses in recent years.

Therefore last month’s decision by UK Environment Secretary, George Eustice, to grant ‘emergency’ use of the banned bee-killing pesticide, thiamethoxam, for sugar beet in England, was met with disappointment and disbelief.

This went directly against the advice of government experts, who say there is an unacceptable risk to honey bees and other pollinators from using this chemical, which is used to control virus-carrying aphids. Aphids are small bugs which feed by sucking sap from plants.

The pesticide is used to control virus-carrying aphids (small bugs).

In response, lawyers for the Wildlife Trusts are now launching a legal challenge, unless the government can prove their decision to be lawful.

“We’re faced with the shocking prospect that bee-killing pesticides will become the new norm, with bans lifted every year,” says Craig Bennett, chief executive of The Wildlife Trusts.

“We need to know what plans the government has for avoiding the use of a product that’s so harmful to pollinators, rivers and people.”

He asks, “Why isn’t the government listening to its own expert advisers? In the recent Westminster debate on the issue, this was the question many MPs asked – and yet the government was unable to respond coherently.”

Neonics are banned in the EU and UK

Thiamethoxam belongs to a class of pesticide known as neonicotinoids. Commonly called neonics, these chemicals are widely used throughout the world. But in 2018, the most toxic ones, including thiamethoxam, were banned from all outdoor use in the EU and UK, because of the overwhelming evidence of the harm they cause to bees and other pollinators.

Bees, poisoned with these chemicals, often exhibit twitching or paralysis of flight muscles and there is a failure in the homing behaviour of foragers, resulting in less available food for the colony. A single exposure is enough to significantly damage the ability of future bee generations to reproduce.

Widespread environmental contamination is also common, with neonics leaching into the soil, contaminating groundwater and affecting aquatic ecosystems. In 2017, a survey also found their residues in 75 per cent of analysed global honey samples.

But loopholes allow continued use...

However, widespread use continues because EU member states can grant an ‘emergency derogation’.

This allows temporary usage if such a measure appears necessary because of the danger of a virus which cannot be contained by any other reasonable means.

Over half the sugar consumed in the UK is produced from sugar beet grown in England.

Vast amounts of prime agricultural land is put aside for the purpose of satisfying our insatiable demand for sugar, but climate change is causing problems for the crop, with warmer winters failing to kill the virus-carrying aphids found on the crop.

This has resulted in ongoing pressure from British Sugar to allow the use of thiamethoxam in certain circumstances, to control the aphid numbers.

Although granted last year, emergency authorisation was not implemented as cold weather killed the aphids, leaving only two per cent of the crop infected.

Unfortunately - this winter is much warmer. Therefore, when scientific modelling is published on 1 March 2022, projected levels of the virus could be close to the threshold which would allow ‘emergency’ use of thiamethoxam, through ‘seed-dressing’ of sugar beet, to control aphid numbers.

Only around five per cent of the pesticide reaches the crop using this method. The rest accumulates in the soil, often reaching higher and more persistent levels of contamination than in pollen and nectar.

This can be a significant route of exposure for many organisms, including many bee species, most of which nest underground. It is also absorbed by roots of wildflowers and hedgerow plants visited by bees.

So are the UK’s bees safe?

Just three months ago, the Environment Act became law in the UK, and the government pledged to halt species decline by 2030. However, according to Nick Mole, Pesticide Action Network UK Policy Officer, much more needs to be done to ensure nature does not lose out to profit.

“Alternative controls need to be found for sugar beet including choosing varieties that are resistant to disease, and the sugar industry needs to plough in some of its vast profits to help its growers develop effective strategies that do not require the use of bee-toxic neonicotinoids.”

Much more needs to be done to ensure nature does not lose out to profit.

“The UK government needs to stop approving these derogations as a matter of course. If they are really committed to halting biodiversity losses they need to act, and the sugar industry needs to support its growers to be more sustainable,” he explains.

Since 1970, half of all insects have been lost.

In the UK, butterflies and moths are under threat, and wild bees and hoverflies are now absent from a quarter of the places they were found in 1980.

The sugar industry needs to support its growers to be more sustainable.

Two British bumblebee species have become extinct and eight species are endangered. A similar situation is occurring across Europe, with the European Red List for Bees showing almost one in ten wild bee species is facing extinction.

Strategies such as good husbandry, natural pest control and use of resistant varieties, help ensure sugar beet can be grown without threatening our bees, as many farmers in the EU already realise.