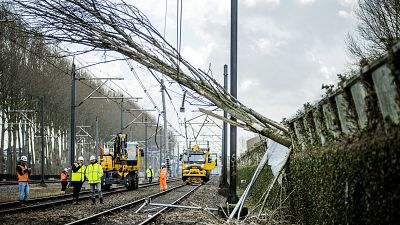 Workers carry out repair work on an overhead line and a railway in Maarssen on February 19, 2022, after Storm Eunice hit northern Europe.   -   Copyright  REMKO DE WAAL/AFP
By Giulia Carbonaro  •  Updated: 22/02/2022

Our best chance to defeat a raging storm is to be one step ahead of it.

By carefully observing the relation between wind speeds and faults on the electricity networks, we are now able to predict when a storm is going to hit as early as 24 hours before it approaches.

"Consequence forecasting", as climate experts and engineers call it, will allow first responders and preventative resources to be deployed where they are needed when the storm hits.

What was the damage caused by Storm Eunice/Franklin?

The UK, which issued a rare red warning over the storms, estimated the damage caused by the fierce winds could cost the country up to £360 million (over €430 million), as hundreds of thousands were left without power and over a million were temporarily disconnected.

In Poland, another million people were left without power on Saturday afternoon.

Travelling was brought to a halt in the Netherlands, France, Ireland and Germany, where the train networks were paralysed.

How do scientists predict storms?

Meteorologists use different complex, numerical weather prediction models to foresee the development of storms in the atmosphere.

Using data coming from satellites, aircraft, ships, weather stations and weather balloons across the world, these computer programmes can predict when weather conditions are changing and a storm is brewing.

Once a developing storm is identified, meteorologists use radars to follow its direction.

How could the new prediction models prevent future storm damage?

According to the Newcastle University researchers behind the study, the new prediction models have the potential to change the way we manage the impact of extreme weather events on infrastructure networks.

By predicting exactly where a storm is going to cause damage and the extent of it, resources to fix that damage could be allocated faster and in a more effective way, reducing disruptions.

"Consequence forecasting", the scientists believe, will be of crucial importance in a future that is expected to bring us more frequent extreme weather events than ever before.