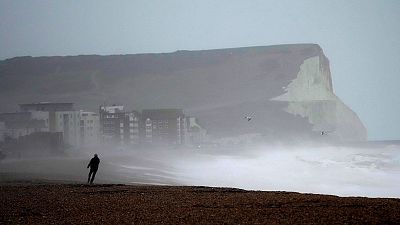 Dozens of flood warnings have been issued across the UK as it is battered by the third storm in a week.

Britain's Environment Agency has issued 184 flood warnings — meaning floods are expected — including two severe warnings for the Greater Manchester area with an "immediate risk to life".

Many residents were on Sunday told by the Greater Manchester Council to prepare for a possible evacuation as heavy rains brought in by Strom Franklin were expected to fall on grounds saturated by the precipitations observed during Storm Dudley and Storm Eunice over the past week.

The Met Office had issued an amber weather warning for Northern Ireland, which was forecast to be hit with the strongest winds. A yellow warning for wind was meanwhile decreed for most of England.

The meteorological agency has warned that disruptions to travel could take place.

Three people were killed in England by Storm Eunice, which swept through Ireland on Friday morning and northern European countries over the weekend.

At least 13 people also lost their lives in the Netherlands, Poland, Germany, Belgium and Ireland combined.

The storm caused major travel disruptions and brought down power for millions of households across the UK and northern Europe.

More than 55,000 customers were still without power across the UK on Sunday evening, according to Business and Energy Secretary Kwasi Kwarteng. More than 1.35 million customers had meanwhile been reconnected.

Three injured after fire breaks out at German residential complex