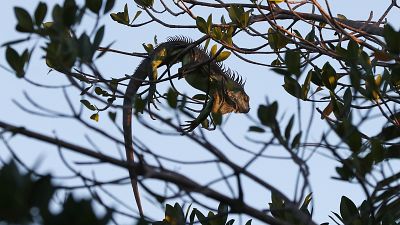 Iguanas are dropping from the sky in the state of Florida, US.

Residents report that the “iguana fall” has now become a seasonal phenomenon, as lizards fall onto the roofs of their cars from overhanging trees. It’s become as predictable as snow or rain in the region.

So what’s going on? Iguanas are falling from the heavens because they are freezing. They aren’t dead - rather temporarily immobilised when temperatures go under 10 degrees C.

The US National Weather Service for Miami-South Florida has warned locals and visitors that these paralysed iguanas might fall from above due to unusually cold temperatures.

Temperatures in South Florida reached a low of -3.8 C on Sunday. Simultaneously, the north-east of the US was hit this weekend by a deadly winter storm that prompted several states to cancel at least 1,400 flights.

hi please enjoy this video from this morning when i found an iguana had fallen on my car bc of the cold temperatures. we love florida pic.twitter.com/vYGZTnvqnc

Why are iguanas getting so cold?

Iguana numbers continue to thrive, as an invasive species not native to Florida, but they’re still vulnerable to temperature changes.

Like all cold-blooded reptiles, they like warmth, so freezing conditions cause their blood to stop flowing around their bodies properly.

This renders them paralysed, meaning they can spontaneously fall from the trees they are residing in at any given moment.

Florida Fish and Wildlife Conservation Commission (FFWCC) has provided guidance for what to do if you see a stunned iguana lying on the ground, near your house or on your car.

“Don’t bring wild green iguanas into your home or your car – they can recover quickly in warm temps and use their long tails and sharp teeth & claws when defensive. Also keep in mind that people cannot be in possession of live green iguanas without a permit as they are a Prohibited species in Florida,” it says.

The iguanas will wake up once they feel the sun’s warmth on their faces.

They can recover quickly in warm temps and use their long tails and sharp teeth & claws when defensive.

And - “don’t relocate or release green iguanas (or any nonnative species) – it is illegal and can harm native wildlife.”

What else is affected by the freezing temperatures in Florida?

The so-called ‘sunshine state’ of Florida is not used to being cold and neither are its animals or crops.

If it's below freezing for too long, fruit on citrus trees will get burnt and drop off. Strawberry plants can die, along with tomatoes, bell peppers, beans, corn, lettuce and cabbage - which will all be wiped out by cold spells of over eight hours.

Cold stress can also be deadly for manatees and sea turtles in coastal waters.

Around 50 manatees die from exposure to cold temperatures every year. Sea turtles are also at risk and there is a multi-organisational effort taking place in Florida to help prevent too many turtles from perishing.

Initiatives such as the the Florida Hawksbill Project aim to study and protect the region’s hawksbill sea turtles in their habitats.