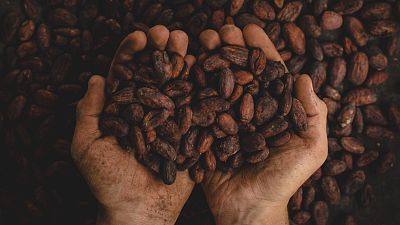 A cup of coffee to start the day is non-negotiable for millions of people around the world. We’ve been drinking it for hundreds of years, with the earliest references to our favourite pick-me-up dating back to the 15th century.

Europeans are avid coffee enthusiasts. Some of the world’s most prolific coffee-drinking countries include Finland, Norway and Sweden, where they go through over 8kg of the stuff, per person, every year. According to the International Coffee Organization globally this adds up to nine million tonnes being produced around the world every year.

But our coffee drinking habits could soon be under threat. A new study by scientists in Switzerland has revealed that the world could lose half of its best coffee producing land as a result of climate change. And that's only in a moderate scenario.

According to the study, which analysed the effects of climate change on the key tropical crops of coffee, avocados and cashews, Brazil - currently the world's biggest coffee growing nation - will see its viable land decline by 79 per cent.

But what will climate change mean for the production of this much-loved bean?

Coffee beans are mainly produced by small-scale farms in tropical regions, including Latin American countries such as Colombia and Brazil. Coffee is one of the most important export crops for these regions with Brazil's economy making $38.1 billion ( €33.4 billion) from coffee sales in 2021.

Experts believe that we could be just a few seasons away from complete coffee collapse.

Millions could lose their incomes

We might be about to lose our morning caffeine hit but for the 125 million people who depend on coffee for their livelihoods, the effects of climate change could prove disastrous. 80 per cent of the coffee sold worldwide is grown on farms smaller than 2 hectares across Africa, Latin America and Asia.

Despite coffee being the most popular drink on earth, few of these farmers make a fair wage from what they sell, says the Fairtrade Foundation. It is a notoriously unstable market that sees prices fluctuate year on year, making it difficult to ensure a stable income. Prices depend on weather conditions, a fact that makes increasing unpredictability a big issue for growers.

Regions in Africa ideal for coffee growing have always had a somewhat tempestuous climate but recent extremes have made things even more difficult. Rainfall is a big problem. Water is not easy to come by in many of the mountainous areas where coffee is grown and reliable weather patterns are essential for producers. They also need a consistently arid season to flourish, as coffee ‘cherries’ need to be dried out before they can be roasted. This is more often than not done outside using the heat of the sun.

In early 2020, deluges of unseasonal rainfall led to flooding across east Africa where many beans are grown. This is meant to be the time when the cherries are dried and it left smallholders scrambling to save their crops before the rain caused them to go mouldy. Droughts in what should have been rainy seasons have also affected yield in recent years, as weird weather becomes the norm. None of this bodes well for the future of coffee and the 25 million families in impoverished areas who rely on our caffeine habits to get by.

In Peru where crops are particularly vulnerable to climate change, farmers have been gradually moving further and further up into the mountains. The Fairtrade Foundation offers these growers with a reliable price and encourages the formation of cooperatives. Education is vitally important in helping communities that rely on coffee to adapt and providing a democratic system of aid ensures that those worst affected can get the information and resources they need.

What will happen if viable land is lost?

Most research into the impacts of climate change on food ecosystems has focused on temperate regions, where staple crops like potatoes and wheat are grown. Tropical regions, like Latin America, have received less attention, even though they account for 40 per of global land, supporting over three billion people.

If coffee-growing land is lost, this could have a major impact on the livelihoods of billions of people, and with weather patterns growing more and more unpredictable, the impacts will not be spread evenly.

In fact, some regions may even benefit from climate change, meaning they'll be able to produce coffee crops for the first time. Countries where coffee growing may become sustainable include China and the US.

Deforestation, climate change and the rapid spread of disease may have affected the plants we grow for our morning brew, but they have also had an impact on the wild relatives these species descend from. An ancestor of the first cultivated coffee plant has been added to the IUCN’s Red List of endangered species and last January, scientists at London’s Kew Gardens also discovered that over half of all wild coffee species are at risk of extinction.

Currently, the global coffee trade relies on just two varieties, Arabica and Robusta. As the effects of climate change worsen, wild coffee species could be the answer to creating plants that survive extreme hot and wet conditions. Unlike those that we have been cultivating for hundreds of years, these naturally evolved varieties have greater biodiversity making them much more resilient. But only if we manage to slow the environmental changes that are placing them at threat of extinction. Their disappearance, according to Kew’s scientists, would leave farmers with very little room to adapt to the inevitabilities of the climate crisis.

On the release of the report, Dr Aaron Davis, head of coffee research at Kew explained that breeding new coffee species could be key to resisting the effects of global warming. “Among the coffee species threatened with extinction are those that have potential to be used to breed and develop the coffees of the future, including those resistant to disease and capable of withstanding worsening climatic conditions,” Davis said.

Craig Hilton-Taylor, head of the IUCN Red List says that the potential extinction of many of the world’s coffee species raises “serious environmental, economic and social concerns.” He explains that “the numerous wild relatives of the commercially grown crops, such as Arabica coffee, are essential to ensure the resilience of cultivated coffee in the face of climate change and other threats.”

He continues, “there is mounting evidence that climate change is affecting many crops, not just coffee. The situation is alarming and is an important reminder of the need for effective species conservation.”

Like with many environmental issues, better respect for our trees could provide the answer to saving coffee. Creating a canopy over crops provides shade for the plants, reducing average temperatures and helping to take the edge off climate change-related extremes. It also shores up soil at risk of erosion from increased flooding and aids with biodiversity essential to keeping out pests and diseases.

This practice is called agroforestry and could stop a significant proportion of the land suitable for coffee production from becoming unusable in the hilly regions of southeast Brazil, according to one recent study. Previous research has indicated that these areas could be completely unusable by 2050 if nothing changes, having a massive impact on the supply chain of the caffeinated beverage.

Ultimately, however, these solutions are a mere stopgap for the onslaught of climate change. Unless we get a true handle on beating global carbon emission targets, the potential for coffee to disappear from the supermarket shelves is an ever-looming threat. “Our study indicates that major shifts in areas suitable for coffee production may take place within three decades, potentially leading to land conflicts for coffee production and nature conservation,” authors of the paper say. That isn’t long to ensure the future of the world’s favourite thirst quencher.