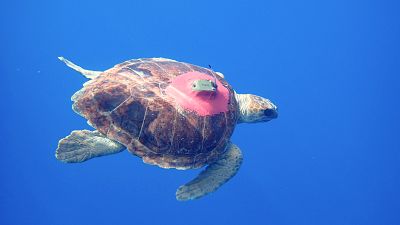 Sea turtles on Reunion Island, a French territory in the Indian Ocean, are being fitted with special tags to help researchers collect data about cyclones.

Tropical cyclones have a devastating impact on the islands of the southwest Indian Ocean, including Madagascar, which is affected by an average of 1.5 cyclones a year. The most inhabited coastal areas are the most exposed, so predicting the cyclones' outcome and impacts is a major concern.

Threatened by humans due to the affects of poaching and overexploitation, sea turtles are now helping to protect them. The special initiative, called STORM (Sea Turtles for Ocean Research and Monitoring) is a partnership between the Kelonia care centre and the Atmosphere and Cyclone Laboratory of the University of La Réunion.

Over the past two years, around thirty turtles have been equipped with the tags and then released into the Indian Ocean. Last week another four joined them, after completing their recovery in Kelonia care centre.

The tags weigh no more than 250g - 500g, ensuring they do not impact the behaviour of the turtles, which weigh between 50kg-105kg.

The so-called 'Argos tags', which are attached to their shells, transmit data to researchers about water temperature, salinity and conductivity levels in the ocean. Sea turtles migrate an average of 15,000 kilometres during their lifetime. Due to the tags, they can now share real-time information from close to the centre of cyclones, areas that satellites are not able to cover.

By combining metrological and oceanic information with the data the turtles transmit, scientists are now able to collect more information about cyclones. This helps them to predict their growth and when they are likely to hit coastal areas.

Meet the flying sea turtle who travelled 8,000 kilometres to Scotland

These 'turtle dogs' are sniffing out a threatened species