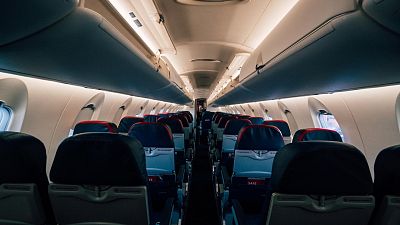 Rules about landing and taking off have left airlines running empty or half empty flights.   -   Copyright  Pexels
By Jonny Walfisz  & Rosie Frost  •  Updated: 27/01/2022

With passenger numbers still low due to the pandemic, airlines are being forced to fly empty ‘ghost flights’ in order to keep their airport slots.

The issue hit the headlines earlier this year when German flag carrier Lufthansa said that it would have to run 18,000 half-empty flights.

The practice allows companies to retain their right to take off and land at the busiest airports - one of their most valuable assets. Before the pandemic, 80 per cent of slots needed to be filled or the company would lose its permit.

To try and prevent thousands of empty flights from taking off, allowances were made while passenger numbers were low due to the pandemic. But with countries now looking for a return to normal, airlines are being forced to fly empty planes to retain their slots.

Greenpeace estimates that at least 100,000 ‘ghost flights’ could be flown this winter. The campaign network claims this could generate up to 2.1 million tonnes of greenhouse gases - the equivalent yearly emissions of 1.4 million petrol or diesel cars.

"We’re in a climate crisis, and the transport sector has the fastest-growing emissions in the EU – pointless, polluting ‘ghost flights’ are just the tip of the iceberg," says Herwig Schuster, spokesperson for Greenpeace’s European Mobility For All campaign.

As the summer season approaches, the percentage of flights needed to keep these rights is set to increase once again. The UK government has announced that from late March, airlines will have to use their slots 70 per cent of the time.

“Our package of measures for Summer 2022 does just that, supporting the sector financially, encouraging recovery and reducing the risk of any unnecessary, environmentally damaging flights,” the Department of Transport tells Euronews Green.

Described by Transport Secretary Grant Shapps as a “step back towards normal”, the UK is currently proposing the highest requirement for slot usage in the world.

But, according to Willie Walsh, Director General of the International Air Transport Association (IATA) it is “inconceivable that international demand will average 70 per cent this summer.”

While demand for flights is growing, international and domestic travel restrictions are still in place in many parts of the world forcing airlines to operate at low capacity. It is a move that Walsh says is “environmentally stupid.”

“The UK government decision on slots, proposing the highest slot use threshold in the world, makes a mockery of their claims to be supporting the recovery of the airline industry and to be champions of the environment,” he adds.

Low-cost carriers believe that to prevent flights from taking off empty, the slots should be sold to other airlines instead. Wizz Air says it has recovered a lot quicker than “legacy carriers” with demand bouncing back to pre-pandemic levels.

“Wizz Air would be able to successfully operate these slots at constrained airports, so we do not understand why they are protected for the benefit of the legacy carriers who are incapable of operating them efficiently,” the company told Euronews Green.

One of the airlines already selling its slots is Norwegian which says it doesn’t operate ‘ghost flights’ and never has.

“In regards to our Gatwick slots we have recently sold some to Wizz Air and entered into leasing agreements with other companies, we intend to fully utilise the rest,” Norwegian says.

“There is no environmental impact from our standpoint since we do not operate ‘ghost’ flights.”

Getting rid of ghost flights altogether

With growing attention on the issue, there are now calls to reform landing rights, ending ‘ghost flights’ altogether. More than 6,500 people have signed a petition drafted by Anna Hughes, director of Flight Free UK.

“Airlines have been flying planes empty to retain their landing slots. These ‘ghost’ flights are a shocking waste of resources and a needless source of emissions,” it reads.

These ‘ghost’ flights are a shocking waste of resources and a needless source of emissions.

Adding that it “beggars belief” that planes are flying empty during a climate emergency, it asks the UK government to reduce the requirement to 0 per cent as a permanent measure.

Others believe that a more general review of the aviation industry is needed to address environmental issues.

“Clearly flying planes with fewer passengers is bad, and taking off with an empty plane to fly around in a circle is very bad,” explains Matt Finch, policy manager at campaign group Transport & Environment.

“But it doesn't matter if the plane is full, half full or empty, it is still burning untaxed fossil fuel - and that is the core problem.”

What is COP15 and how is it addressing climate migration?

'Forever chemicals' in tap water near Lyon: How harmful are they?