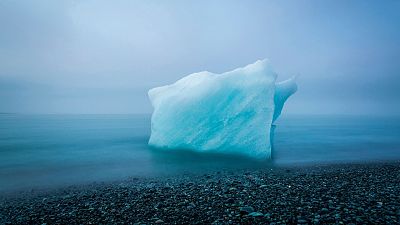 A ‘blue blob’ in the North Atlantic Ocean has been slowing down the melting of Iceland’s glaciers, a new study suggests.

Various explanations for its irregular temperature have been offered but the mysterious patch of cold water just south of Greenland has puzzled scientists for years.

It has been linked to a weakened ocean current in the Northern Atlantic which typically brings heat up from the tropics. Research from 2020 also found that other human-caused factors are at play, including the formation of “low-level clouds” above the blob which deflect sunlight.

Now a new study, published in Geophysical Research Letters, shows how the blue blob has been mitigating atmospheric warming in Iceland since 2011 and reducing glacier melt.

The correlation between the blue blob’s formation and the less drastic loss of Iceland’s glaciers was a surprising discovery for the research team from Iceland and the Netherlands, lead author Brice Noël tells Euronews Green.

The surprising relationship between Iceland’s glaciers and the blue blob

Ever since the Little Ice Age ended in the late 1880s, Iceland’s glaciers have been losing mass.

When the snow that falls on a glacier in winter is less than what is lost when it melts in summer, it leads to something called negative surface mass balance (SMB). This ultimately causes sea-level rise.

The rate of loss accelerated in the 21st century, but researchers were intrigued to find that it had slowed down dramatically from 2011. This isn’t the case for the surrounding titans of the Arctic. The Greenland Ice Sheet is the single largest contributor to rising sea levels, shedding 166 billion tonnes of ice in the year to August 2021.

The blue blob is an anomaly too. While global temperatures have risen by an average of 1C over the last century, the blob - also called a ‘warming hole’ - has dropped by as much as 0.9C.

The more the researchers looked into it, it seemed increasingly certain that there was a connection. With Iceland more exposed to the ocean and maritime influences than Greenland, it appears that a cooler convection of air from the blue blob has kept its glaciers more intact.

“It really shows you have these interactions between land, ice, atmosphere and ocean,” explains Noël, a post-doc at the Institute for Marine and Atmospheric research in Utrecht.

“And all of those combined can create some kind of feedback mechanism that is slowing down mass loss, but unfortunately only for a temporary moment.”

Icelandic glacier loss set to speed up again from 2050s

According to the team’s climate modelling - which takes into account satellite observations and fieldwork - there will be a very brief spell in the late 2040s where these glaciers actually go back to a SMB of zero. But by the mid-2050s global warming will flip the narrative.

Once the blue blob stops cooling, the ice will start to melt even faster than it can be replaced. By the end of the century, the scientists estimate that these glaciers will lose a third of their total volume - with disastrous consequences around the world if climate change is not curbed.

“The Arctic is warming fast, and it can be difficult to live with” says Noël, “but climate projections give us trajectories that enable us to see what needs to be done to try and mitigate glacier melt."

Iceland to end whaling by 2024 after fall in demand, authorities say

Denmark has built weirdly tall benches as a warning - but what is it?

Could we hit 1.5°C of global warming in the next five years?

‘Retreating into shadows’: How the climate crisis is impacting cricket