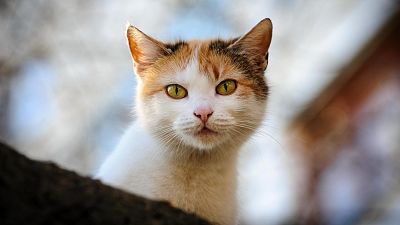 Like most domestic cats, your feline friend can likely trace its roots back to the classical period of Ancient Egypt.

Domesticated cats derive from the African Wildcat, a type of moggie first tamed by the ancient Egyptians and used to protect grain supplies over 10,000 years ago.

People in the Fertile Crescent - which curves from western Iran to the Mediterranean Sea - worshipped these animals, frequently depicting them in sacred ornaments. Famously, they even mummified them when they died.

It is perhaps little surprise, then, that an Egyptian environmental artist is creating a warm place to sleep for Cairo’s homeless feline population.

In the winter months, temperatures in the Egyptian capital can plummet to as little as seven degrees Celsius - putting the city’s growing population of stray cats at risk.

"There is snowfall and heavy rainfall in Egypt as a result of climate change," says Ibrahim Abougendy, who creates mobile cat shelters from upcycled car tyres.

"We are trying to be one step ahead for stray animals who are at risk because of changes in the weather."

The prototypes - which contain both recycled rubber and wood - are distributed throughout the busy streets of Cairo, providing a thermally insulated home for up to five cats at a time.

Abougendy, a founder of eco-friendly design house ‘Mobikya’, is co-operating with Petman, an e-commerce store, to provide the sustainable solution.

"I have always been thinking how to use tyres, which people throw away while having unique characteristics including thermal insulation,” says the artist.

“It’s amazing that we can save the life of a creature from something that we really don't need."

Watch the video above to see Cairo’s cold cats.

Is fermented mushroom ‘meat’ the solution to our beef addiction?

‘Lego blocks’ of solar energy could power all homes by 2030