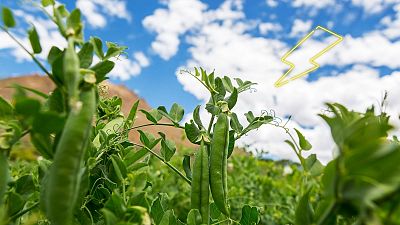 Electrifying peas may sound like a strange way of encouraging plant growth, but a high-voltage field could hold the answer to boosting fruit and vegetable production.

The use of electrical currents in agriculture, known as electroculture, is nothing new. A 1900 study cited experiments showing that potatoes grew six times heavier with an underground jolt while carrots took on ‘unusual’ proportions.

It has never been rigorously researched or widely used in agriculture. But more than 120 years after the first paper, a new study claims that a renewable-powered electrical device can do the same trick.

Researchers at the Chinese Academy of Sciences in Beijing put a small ‘triboelectric nanogenerator’ amid the plants to create an electric field. The device is powered by a mixture of wind and rainfall removing one of the barriers to electroculture: the carbon emissions and energy consumption involved in drawing electricity from the grid.

Compared to a second set of peas grown in normal conditions, the yield from the electrified peas increased by almost a fifth, and the plants germinated faster too.

“The main advance is that the self-powered system can boost crop yield by harvesting the wasted wind and raindrop energy in our daily life,” says the academy’s Dr Jianjun Luo.

Dr Luo and his colleagues say the generator system costs less than €35. They believe their approach could be “immediately and widely” applied to boost food production in a sustainable way.

But other experts in the field aren’t so sure.

We still have a lot to learn about the basic science of how electric fields could increase plant production. Photosynthesis may hold the answer, according to Dr Luo. Researchers observed that peas under the current had more chlorophyll - the green pigments that enable plants to absorb energy from light.

“That’s the big question, and nobody really knows,” Dr Ellard Hunting at the University of Bristol told New Scientist.

He adds that an electric field could be achieved with wind turbines and solar panels, but the researchers approach of using a small device is cheaper.

What potential do electric fields have?

Despite the exciting potential, the new research has garnered a mixed reaction from the scientific community.

A systematic review of ‘the biological effects of exposure to static electric fields’ in 2018 found that all studies suffered from methodological flaws. One of the authors of that paper, Dr Sarah Driessen at RWTH Aachen University in Germany is concerned the new Chinese study takes the workings of electroculture for granted.

“The authors represent it as a fact that static electric fields promote seed germination and plant growth, although this is highly debatable,” she told New Scientist. “The authors do not elucidate the current state of knowledge on this topic properly and the basis for their hypothesis is rather poorly supported.”

As you might remember from biology lessons at school, all factors in an experiment have to be meticulously controlled and human bias kept in check. The fact that the trial wasn’t ‘double-blinded’, meaning those growing the plants knew which ones had an electrical helping hand, also throws some doubt on the findings.

Clearly more biological data is needed in order to rule out other explanations for why the peas grew at different paces, to shore up the foundations of electroculture, and address concerns people might have about their food being given the electrical treatment.

But in time, the new technology could bring more bountiful harvests, and reduce the need for pesticides too. All with some wind, rain - and of course sun.

Is fermented mushroom ‘meat’ the solution to our beef addiction?

‘Lego blocks’ of solar energy could power all homes by 2030