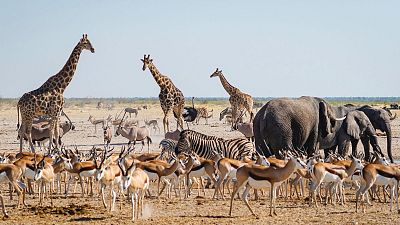 If you’ve ever stumbled across a ‘charm of goldfinches’ or a ‘crash of rhinos’, you’ll know that the names we give groups of animals can be particularly poetic in the English language.

Some of them are self-explanatory - like a leap of leopards, or a tower of giraffes - but others not so much.

And the connection between naming, knowing and caring about nature has been well explored. The Lost Words campaign, which spread across Britain after the Oxford Junior Dictionary removed once-common words like heron, blackbird and dandelion is just one example.

It’s not such a stretch to think that a widespread appreciation of animal groups, in all their glory, could lead to more passionate conservation efforts for the world’s endangered populations.

So to get you started learning more about the natural world, here are 13 of the most weird and wonderful animal collectives.

13. A blessing of narwhals

Narwhals are rare species of whale that spend their entire lives in the Arctic waters of Canada, Greenland, Norway and Russia.

Perhaps because narwhals are rarely seen by humans, these groups are known as a ‘blessing’ - something that is gifted and not taken for granted. Most males have a single tusk, earning the species another distinctive title: “the unicorns of the sea.”

Rather less elegantly, a group of rhinos is called a ‘crash’. It’s a befitting name for the megafauna, which can weigh more than 3 tonnes (white rhinos) and can run up to 34mph (black rhinos).

You wouldn’t want to be on the receiving end of that charge - but of course humans have done far more damage to rhinoceroses through poaching and habitat loss.

11. A charm of goldfinches

Collective nouns for birds are undoubtedly some of the finest. Chief among these is a ‘charm’ of goldfinches.

Though it sounds flattering, the word actually comes from the Old English ‘cirm’, or ‘cyrm’ to describe the birds’ chattering song.

10. An unkindness of ravens

We don’t know exactly why ravens are called ‘an unkindness’ when they huddle together.

Language experts believe it is probably a term from the nineteenth century based on a moral view of their behaviour. Ravens are often scavengers meaning they gather to feed on the corpses of dead animals left out in the open.

The collective noun for ravens is an "unkindness". This unkindness is scavenging a buffalo carcass in the Drakensbergs.
(John Macfarlane) pic.twitter.com/YfIbw4OeUE

9. A murder of crows

When it comes to collective nouns, birds in the corvid family tend to get a bad rap. Crows are called a ‘murder’ - likewise because of their scavenging nature. They’re also very sociable, mate for life, and have been a major literary inspiration for writers through the ages.

The collective noun for wrens is a ‘chime’, a sweeter word for a flock of the songbirds. They’re also known as “little king” in Dutch, and “druid” in Welsh. Wrens’ Latin name is “troglodytes troglodytes” meaning “cave dweller” - as they often nest low down in dark retreats, snug holes and under hedges.

7. A memory of elephants

Easily one of the most evocative collective nouns is that for elephants: a ‘memory’. It’s bound up with the saying that “an elephant never forgets” because of their remarkable recall and intelligence.

One study found that experienced elephant matriarchs give their family a greater chance of survival when faced with famine and drought, by remembering distant resources.

6. A labour of moles

A group of moles is called a ‘labour’ - likely because of their hard-working nature, tunnelling up to 200 metres a day. If you already knew this noun you can give yourself a pat on the back; one UK quiz show contestant thought the political party which shares its name with a collective noun for moles was the Liberal Democrats.

5. A bloat of hippos

The collective noun for hippopotamuses is aptly a ‘bloat’. Amused by this name on safari in Botswana, one traveller traced the animal term back to the legacy of a fifteenth century noblewoman, Juliana Berners, who kept a record of these nouns as they evolved in the English language.

Playful, slippery otters have a whole host of names to describe them. ‘Raft’ is used for sea otters who keep a close grip of kelp to anchor themselves to the seafloor, and so avoid drifting away while floating on their backs to sleep or eat. It’s also been discovered that otters have a close relationship with seagrass causing it to reproduce at a faster rate. ‘Bevy’ and ‘romp’ are other common terms that sum up these animals’ sociable nature.

3. A parliament of owls

Another striking collective bird noun is a ‘parliament’ of owls. It harks back to ancient Greek mythology, which saw them as a representation of Athena, goddess of wisdom. Our belief in the wisdom of parliaments may have ebbed over the ages, but owls are still esteemed as wise and canny creatures.

2. A smack of jellyfish

Jellyfish typically appear in ‘swarms’ or ‘blooms’, but a ‘smack’ of jellyfish better captures the potential danger some species can pose. Though people love these fascinating and often beautiful fish, the sharp (sometimes lethal) slap of their tentacles is better avoided.

1. A surfeit of skunks