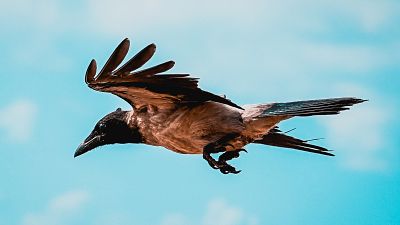 Wild birds could be killed to protect game birds bred for shooting after a recent change to the law in England.

Millions of beautiful, colourful pheasants are bred every year for British game farms. They are fattened up so that they’re slow and easy to shoot once the hunting season begins.

But there has long been debate over when predators can be shot to protect them. Now, as part of new guidelines, the Department for Environment, Food and Rural Affairs (Defra) has included a definition for when these birds are considered livestock.

Under guidelines on general shooting licences approved in England on 3 January, gamekeepers will be able to legally shoot crows, magpies and jackdaws to defend pheasants, grouse and partridges.

But only when they are “kept in an enclosure or which are free-roaming but remain significantly dependent on the provision of food, water or shelter by a keeper for their survival.”

Why is the legal situation around game birds so confusing?

Unlike chickens, pheasants aren’t technically bred for the food industry - they’re bred to be shot.

The problem, for gamekeepers, is that you can’t shoot livestock for sport, according to British law. To get around this, the law sees pheasants as potentially both livestock and game birds - but never at the same time.

Pheasants, considered livestock since breeding, are classified as ‘wildlife’ once released into the woods for hunting.

As soon as the shooting season comes to an end, the surviving ‘wild’ pheasants are rounded up and brought back into captivity - turning them once again into livestock.

Classifying them as livestock allows breeders and farmers to be legally protected against liabilities. It also entitles the birds to be protected by the same animal welfare rights that grant cattle enough space, access to water and food to live a ‘happy’ life.

In recent years, ecologists have been calling for the number of pheasants bred and released into the wild in the UK every year to be scaled back. They already greatly outnumber all British native birds put together.

In the 1970s, there were only 4 million pheasants in the UK. Now their total numbers reach a staggering 60 million.

And their presence has dramatic consequences on the environment. The Royal Society for the Protection of Birds, Wild Justice and other conservation organisations in Britain have found that the ever-growing population of pheasants damages native wildlife.

The animals gobble up insects and plants, leaving their droppings across sensitive habitats.

In 2021, their vocal protests led Defra to pass a law requiring gamekeepers to seek a licence before releasing pheasants near nature reserves.

Why have 2,500 dead seals washed up on Russia’s shores?