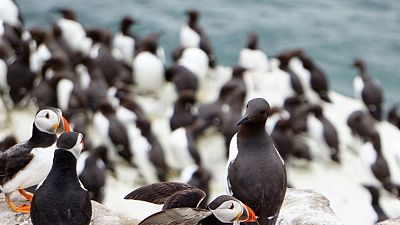 Over 100 puffins have been found dead on the northeast coast of Scotland, Shetland and Orkney.

The birds, nicknamed ‘sea parrots’ because of their colourful beaks, have been washing up over the past three weeks. It’s one of the biggest mass die-offs discovered in this season for the past 50 years.

The cases are being closely tracked by the UK Centre for Ecology and Hydrology (UKCEH), which carries out long-term monitoring of seabird populations, to record the effects of environmental change.

Some of the puffins washing up in Orkney are adult birds, which raises concerns that there will be a knock-on effect on breeding numbers next year.

“This is one of the most significant puffin ‘wrecks’ we’ve seen for this time of year since we began studying these fascinating seabirds almost 50 years ago,” says Dr Francis Daunt, seabird ecologist at UKCEH.

“Many of the people who have found the birds say they are emaciated, which suggests there could be a problem within the marine food chain.”

In the wild, puffins have an average lifespan of 25 years, with each adult pair mating for life.

In the wild, puffins have an average lifespan of 25 years, with each adult pair mating for life. During the spring and summer breeding season, each couple lay just one egg on average. A puffin chick is called a ‘puffling’.

While Atlantic Puffins - the species found in the UK - are not endangered, their numbers are in decline. This is due to overfishing, which reduces their supply of small fish, such as herring and hake. Pollutants, such as oil spills, can also harm seabirds. Oil can coat their plumage, causing them to lose critical body heat.There are thought to be around 580,000 pairs of Atlantic Puffin currently living in the UK.

In September and October this year, thousands of guillemots and razorbills were also found dead along the east coast of the UK, but scientists don’t yet know if these occurrences are linked.

Hundreds of the birds were tested for avian flu, as the UK is currently experiencing its largest ever outbreak, but the tests came back negative.

Several #Puffins have come ashore here in Shetland over the last few days. Suspect it is linked to the situation along other North Sea coasts from Orkney - Netherlands. Food shortage? Storms? Happy to say this one was released in a much better condition than when we found it ? pic.twitter.com/GYy0hNHCEk

“It is worrying to see puffins washing up dead and sick. We hope to be able to carry out post mortems on them as well,” says Dr Daunt.

The investigation into the deaths of the razorbills and guillemots is now focusing on two possible causes: a significant failure of the marine food chain or toxic poisoning due to algal blooms, though it may be a combination of the two.

“It is worrying to see puffins washing up dead and sick."

The failure of the marine food supply chain could be due to the unusually warm water temperature that occurred in early September 2021, a few weeks before the birds were discovered.

The final results of the study, which is a partnership between the UKCEH, the Marine Scotland directorate of the Scottish Government, Plymouth Marine Laboratory, Edinburgh University, Centre for Environment, Fisheries and Aquaculture, Natural England and DEFRA will not be available until early next year.

What should you do if you see a dead puffin?

Anyone who spots a dead puffin should take a photograph of it, if it is safe to do so.

The photo should clearly show its beak and wings and can be sent to the UKCEH via enquiries@ceh.ac.uk. The public are advised not to touch any birds that they discover.

If you see any birds that are sick but alive, please contact the SSPCA or the RSPCA.