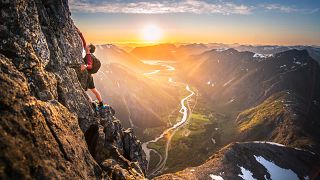 It’s International Mountain Day and we are turning our attention to the important role that mountains play in our global ecosystem.

Mountains are home to 15 per cent of the world's population and host about half of the Earth's biodiversity hotspots. Not to mention, mountainous regions provide fresh water for over half of all humanity.

That’s why, on 11 December 2003, International Mountain Day (IMD) was first designated by the United Nations General Assembly, to highlight the importance of sustainable mountain development.

The theme of this year's IMD is sustainable mountain tourism. Mountain tourism - including skiing and hiking - accounts for about 20 per cent of all global tourism.

Sustainable tourism in mountains could help to create additional and alternative livelihood options for a sector that has been heavily affected by the pandemic.

Sustainable mountain tourism in regions under threat from climate change and overexploitation could help to promote landscape and biodiversity conservation, while also alleviating poverty.

The theme of this year's International Mountain Day is sustainable mountain tourism, an industry that accounts for about 20 per cent of all global tourism.

To celebrate this year’s IMD, we spoke to some of our favourite mountain photographers from Picfair's IMD gallery about their photos and their take on mountain tourism.

Einar Rúnar Sigurðsson is a 53-year-old mountain guide and landscape photographer from Öræfi in southeast Iceland. The longest-working mountain guide in Iceland, Einar started guiding clients to Iceland’s peaks and ice caves in 1994.

Do you have a favourite mountaineering moment in your career?

“In 1999 I crossed Iceland on skis from the north coast to the south coast. I think coming home that late afternoon after 15 days in the snow is one of my favourite memories. To simply sit down in my aunt’s kitchen, eat cakes and drink coffee and be able to take a long hot bath and sleep in my bed. Makes me appreciate the value of the everyday things in life that we take for granted but we should be so grateful for having.”

Have you seen any dramatic changes in the landscape of Iceland since you began taking photos?

“Yes, especially the glaciers. Some of them have retreated several kilometres since I started to photograph them. But at the same time, I also see more and more vegetation and forestry covering areas that were just rocks and sand when I was younger.”

What is one thing that you wish people knew about the Icelandic environment?

“Iceland is one giant [gauge] for climate change in the world. Through the centuries since the settlement of Iceland around 900 AD my forefathers have seen glaciers seep down from the higher ground almost into the sea and a country covered with forests and vegetation from coast to mountains become barren wastelands.

Until now, the climate has been changing from natural causes, but [today] we are also threatened by climate change affected by human affairs. Iceland remains very dependent on a stable climate so we will probably continue to be among the first to be affected if climate change gets worse.”

Cory Lescher is a 34-year-old marine biologist who spends his spare time exploring the Alaskan wilderness with his dog, Stew. Cory donates 50 per cent of his photography sales to different environmental charities every month.

What is it that inspires you about the Alaskan wilderness?

“The scale of the Alaskan Wilderness is incredibly grand and it's also very remote. Once you're there, it feels entirely endless and the beauty is breathtaking. I began taking pictures as a way to bring that wilderness closer to people who do not have the luxury to experience it in person.”

In the spirit of International Mountain Day, what is your favourite thing about photographing mountain landscapes?

“The scene is typically so vast, you have endless possibilities of how to set up and take the picture; where you can zoom into a specific peak and the minute details of hanging glaciers and cliff faces or you can pan out and capture the grandness of an entire mountain range with valleys and rivers below.”

Exploring Alaska have you noticed any concerning shifts in the region’s environment?

“I have adventured across much of Alaska, I have seen dying glaciers, melted permafrost, erosion from massive floods and more. Some of these are changes with the cycle of the seasons and some changes are completely altering the local ecosystem.

Arctic mosses and tussocks are drying out, glaciers are retreating, vegetation biomes are changing and forcing grazing animals to shift their diets or search farther for food sources.”

What have you been surprised to learn while exploring the Alaskan wilderness?

“The sun plays a big role in the mountains of Alaska, particularly the angle of the sun and where the shadows are cast across the landscape. When on a ridgeline, one side of the ridge may be completely different from the other, one side might be lush full of wildflowers and colourful lichens while the other side may be completely bare of any vegetation.”

Although the suggested theme for 2021 is sustainable mountain tourism, the UN agency for International Mountain Day welcomes organisations and communities around the to celebrate IMD with a theme that is relevant to them.

You can view the full International Mountain Day gallery, curated by Picfair here, and don’t forget to join the conversation on social media using the hashtag #MountainsMatter.