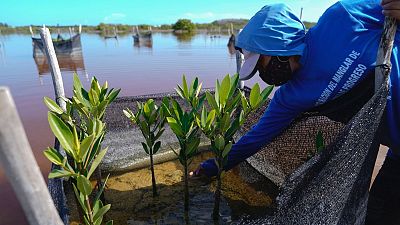 Conversations about climate action so often ricochet between personal and corporate responsibility. It can feel hard to make a difference when Shell is still blasting the oceans during whale-mating season in search of oil, and banks are funding deforestation.

But there are lots of ways we can amplify each other and help snowball campaigns into real change.

Charities come in different shapes and sizes, from grassroots organisations to the ‘big greens’ like Greenpeace which are household names. (Big enough to withstand the legal wrangling of popular series Succession’s Greg - and even turn it into a viral donation opportunity.)

Christmas is a time of giving - and charitable donations shouldn’t just be left in your will.

Christmas is a time of giving - and charitable donations shouldn’t just be left in your will. Whether it’s a gift for the environmentalist in your life, or just a present from you to the planet, why not add one of these green causes to your list?

For the last-minute shoppers out there, donating to a charity has the added benefit of being an immediate 'purchase'. Some also provide printable thank you cards that you can put in an envelope on a branch of your tree, or you could create one of these yourself.

ActionAid is a global movement fighting for climate justice and an end to poverty with a particular focus on women’s rights.

This Christmas, you can sign up to sponsor a child in one of the poorest countries in the world, helping to provide clean water, food, education and healthcare.

The charity also responds to emergencies and has an urgent appeal to support communities in Afghanistan this winter, who are facing a deepening food and malnutrition crisis.

You can direct your donation through 10 different European offices here.

A small but mighty advocate for the beaver, this charity is working hard to bring beavers back to Britain where they went extinct some 400 years ago.

Beaver Trust is already having some success, working with experts to translocate healthy beavers and by winning over landowners and other stakeholders.

As well as being an amazing animal deserving of a tighter grip on survival, beavers provide important environmental services - including building dams to reduce the risk of floods.

Funding legal action is one of the most effective ways to support climate and environmental action.

The Centre for Environmental Rights is a non-profit organisation of activist lawyers who help communities in South Africa fight for their right to a healthy environment.

They advocate and litigate for environmental justice on a number of fronts, including challenging the country’s reliance on coal mining. You can find out more about the centre’s work and donate here.

Another charity that is taking a legal approach to securing system change is European environmental law charity ClientEarth.

Their team of experts are currently working in 50 countries on 166 active cases to protect the planet, so there’s plenty of good causes to back.

The lawyers have been busy all year - exposing greenwashing by big companies, blocking fossil fuel projects in Europe, and helping to introduce clean air zones across the UK.

Guided by the evidence that people who live in the rainforest have historically been its best stewards, Cool Earth channels your cash straight to them.

The UK-registered charity supports 40 “people-powered” projects from Cameroon to Papua New Guinea. It takes a holistic approach to supporting the communities whose lives are intrinsic to the forests - supporting their healthcare, food security and livelihoods - as well as funding climate adaptation projects, like installing solar farms and preventing wildfires.

It also provides no-strings attached cash, a radical and effective action when less than 1 per cent of climate crisis mitigating money is actually reaching people on the ground.

Friends of Cool Earth are matching individual donations throughout December.

There’s a good chance you’ll have encountered Global Witness’s work before, without even realising it. The change-making NGO exposes corruption that drives environmental and human rights abuses.

A two-year Global Witness investigation recently found that some of Europe’s biggest brands like Nestlé and Kellogg’s are using palm oil tied to tropical forest deforestation.

The NGO’s end of year fundraising campaign is focused on campaigns that target the financiers of deforestation.

Surfers Against Sewage (SAS) is a grassroots environmental charity, creating ‘ocean activists’ around the world from its Cornwall base.

Last month, they revealed the shocking state of sewage pollution in UK rivers - which increased by more than 85 per cent over the last year.

They’re helping to drive action on sewage pollution and hold water companies accountable. Find out more SAS, including how to donate here.

For a charity with a really tangible gift-giving scheme, check out Seawilding in Scotland. This community-led organisation is restoring the seagrass meadows of Loch Craignish in Scotland, and £20 (€23.50) will cover a square mile of the sea loch.

As a thank you, it will send an e-card of an appreciative looking crab to your loved one. And they’ll have the benefit of knowing their present is part of a vital habitat, removing carbon 30 times faster than a rainforest.

This includes the planting of mangroves in Madagascar and Mozambique with partner Eden Projects. As we’ve covered on Euronews Green, these incredible saline forests are one of the key ecosystems alleviating climate change.

You can read more about the Bristol-based charity and its global work here.

WECAN is a strong, solutions-focused organisation giving women the training and skills to fight for global climate justice.

They organise a wide array of programmes - from bringing delegations of Indigenous women to confront banks over their fossil fuel investments, to advocating powerfully at climate summits.

Find out more and help their movement building here.

Of course, many of the better-known charities are ones that already have the funds to reach you. While there’s good reason to keep backing Friends of the Earth and other big NGOs as they push for change on the streets and in the courts, there are plenty of brilliant civil society groups around the world who need our support too.

This list of global movements for climate justice compiled by The World at 1°C is another great place to start - with a focus on groups in the Global South.