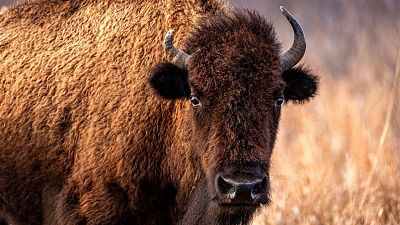 The newest residents of Romania's Carpathian Mountains prefer to shy away from visitors, but traces of their presence are clear to see.

Hoof prints in the mud. Bark stripped from trees.

These are signs of the success of a project aimed at reintroducing bison to the region after a centuries-long absence.

The last wild European bison was killed by poachers in 1927, but their reappearance in Romania is key to keeping the hairy giants off of critically endangered species lists.

"There was an urgent need to once again give the bison the chance to live in the wilderness and to mix the genes of those bison from captivity,” says Matei Miculescu, a forest warden responsible for monitoring the Carpathian herd.

Under autumn sunlight on the edge of an ancient wood, Miculescu is on the lookout for the forest’s newest occupants.

The animals can be hard to spot.

In recent years, they have been tempted further into the forest by the abundant vegetation and the possibility of extending their habitat.

Miculescu says the animals are thriving here, in contrast to captivity which "creates the risk of inbreeding" and weakens their chances of survival.

Romania welcomed bison back into the wild in 2014, more than 200 years after they were last seen here.

"Around 105 bison now live freely in the Tarcu Mountains and have settled in well," says Marina Druga, head of the project led jointly by the WWF and Rewilding Europe.

“The goal is to achieve a population of 250 individuals in five years time.”

After the animals first arrive in the country, they spend several weeks acclimatising to life in the Romanian wild, before being released and left to fend for themselves.

They currently inhabit a protected area of over 8,000 hectares. Since 2014, there have been 38 bison calves born in the region.

"Without [the calves], the project would have no future," says Miculescu, who recognises each creature by its horns.

But those running the project have resisted giving the calves names.

Since they have been born in the wild, all links with humans should be cut, explains Druga.

Architects of the forest

Nowadays, around 6,000 wild bison can be found across Europe.

The WWF says the next step to make the Romanian population sustainable will be to introduce bison into other parts of the Carpathian Mountains.

Along with benefitting the bison themselves, advocates say that rewilding is a boon for the wider ecosystem, bringing benefits for some 600 species - from microorganisms to large carnivores.

"They change the landscape and architecture of the forest by stopping the spread of invasive tree species, spreading seeds for hundreds of plants and creating paths smaller animals use to access food," says Druga.

Weak or sick members of the herd serve as prey for wolves or bears, who in turn will be less likely to stray into human settlements in search of food.

Even those who watch them closely are surprised by the effects the bison's presence can have.

"Birds collect discarded bits of fur to insulate their nests, while frogs can use bison hoof prints to jump from one pond to another," says Miculescu.

Watch the video above to find out more about the herd.