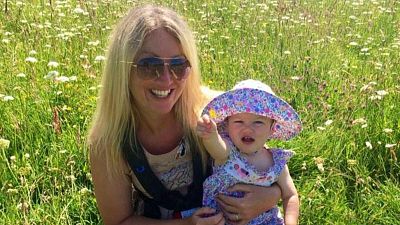 A British climate activist who has been on hunger strike since she was jailed two weeks ago is now in hospital.

44-year-old Emma Smart, a member of Insulate Britain, was sentenced to four months in prison along with eight other climate activists on 17 November. The protest group had been blocking a motorway to raise awareness around the UK’s “leaky” homes.

She immediately vowed to stop eating, and on Friday was moved from her cell to the hospital wing of Her Majesty’s Prison (HMP) Bronzefield amid increasing concerns for her health.

“The window of my cell in the hospital wing is blocked up and there is little natural light,” says Emma, from Weymouth in Dorset. “In my previous cell I could see the birds and trees that line the prison fence. I have less time to go outside in the prison yard for exercise.

“All of this is testing my resolve to continue, but I feel that not eating is the only thing I can do from prison to draw attention to those who will have to make a choice between heating and eating this winter.”

Not eating is the only thing I can do to draw attention to those who will have to make a choice between heating and eating this winter.

New figures released on Friday from the UK’s Office for National Statistics (ONS) show 63,000 excess winter deaths in England and Wales over the 2020-2021 winter period - the highest recorded rate since 1970.

Fatalities are significantly higher because of COVID-19, with campaign group Fuel Poverty Action estimating that around 10,000 people die each year because they cannot afford to heat their homes.

Why did Emma Smart go to prison?

Emma was one of nine Insulate Britain protesters jailed for breaching an injunction to prevent road blockades around the Port of Dover, on the M25 and other major roads after a wave of protests since September.

The biologist must serve at least half her four-month sentence in the Surrey jail for blocking the M25 despite the ban, the court decided, and pay costs of £5,000 (€5,900).

Last week, writing on day seven of her hunger strike, she described the “chilly air blowing through the vent below my cell window.”

Emma said she was drawing strength from nature, with her ‘birding behind bars’ count reaching 15 species.

“Yesterday I watched a beautiful green woodpecker forage in the grass for nearly an hour. His stunning red head a beacon against the grey. There is beauty everywhere, we MUST protect it,” she wrote.

It comes as another nine people from Insulate Britain are due to appear at the UK’s High Court on 14 December charged with contempt of court. If found guilty, they could be subject to unlimited fines and prison sentences of up to two years.

What is Insulate Britain calling for?

The UK climate group, which is an off-shoot of Extinction Rebellion, is campaigning on a single issue: the insulation of Britain’s housing stock. It has identified this as “the most cost-effective means of reducing carbon emissions” which are fuelling the climate crisis.

They want the UK government to embark on a home insulation programme, starting with all social housing, by 2025.

Insulate Britain has set out a time frame for the wider policy change too. Campaigners are urging the UK government to produce a legally-binding national plan within four months, taking full responsibility for retro-fitting all homes in Britain by 2030.

They have the support of other groups pushing for a just transition on Britain’s decarbonisation journey.

“Deaths from fuel poverty in this wealthy country are not an act of G-d but an obscenity. They’re a result of deliberate policies on housing, fossil fuels, pensions, benefits, taxes, and wages that cannot be allowed to stand,” says Ruth London, founder of Fuel Poverty Action.

“Repairing and insulating the UK’s notoriously leaky homes could make them warm, reduce bills and cut down carbon emissions. A new pricing structure could reverse the injustice which sees the people with least money paying most for energy.”

It’s not yet clear how big the turn-out will be near number 10, starting at 8am. The road-blocking tactics of Insulate Britain were widely condemned when they began in September, but more Brits have been won over by their determination to act on the climate emergency since.

With temperatures hovering above 0C in many parts of the UK today, many have been reminded of just how leaky and inefficient homes can be in the colder months.

Around 100 people have responded to the event on Facebook so far. Members of the public and Insulate Britain will be joining Emma Smart’s husband Andy Smith on the fast as her hunger strike tips over into a fortnight.

She is waiting for the UK to make a “meaningful statement” on insulating Britain.

“Not standing by while our government commits treason against the people of this country feels like the most important thing I will do in my life,” she adds.