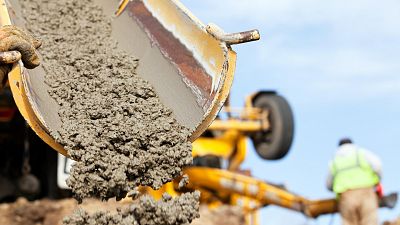 After water, concrete is the most widely used substance on Earth   -   Copyright  Getty Images
By Ben Anthony Horton  •  Updated: 27/11/2021

“If concrete was a country, it would be the third biggest emitter of CO2 in the world.”

These are the words of Dr. Michael Wise, Chief Technology Officer at revolutionary construction company, Concrete4Change.

He and his team are on a mission to change the industry responsible for over eight per cent of global carbon dioxide emissions.

A new cement mixture that sequesters carbon dioxide from the atmosphere.

“Our technology will help the construction industry to recycle its waste CO2 emissions, reduce costs and increase the lifespan of buildings,” says Wise.

“It increases the durability [of the concrete] and permanently mineralises the injected CO2.”

Dr. Wise believes the technology has the potential to mitigate two billion tonnes of CO2, equivalent to four per cent of average global emissions.

But he insists the company’s product is no less effective.

“It’s ordinary concrete that can be used on any site, anywhere, by any company,” he says.

“The only difference is that it is cheaper and more durable.”

How bad is concrete for the environment?

After water, concrete is the most widely used substance on Earth.

A 10th of the world’s industrial water supply is used to mix cement, while only coal, oil and gas emit greater levels of greenhouse gases.

And the stuff is simply everywhere.

By one calculation, concrete already outweighs the combined carbon mass of every tree, bush and shrub on the planet.

In cities, the material adds to the heat-island effect by absorbing the warmth of the sun and trapping exhaust fumes.

In the wild, concrete is causing permanent damage to topsoil - the fertile layer of the earth - leading to irreparable soil erosion.

And while the concrete problem continues to grow, humans continue to build.

Every ten seconds, the global building industry pours more than 19,000 bathtubs of concrete.

What alternatives are there to concrete?

A number of different projects are underway to tackle the high carbon output of the concrete industry.

A 2020 study concluded that recycled concrete can perform as well or better than conventional concrete.

And with global usage on the rise, experts are keen to develop alternatives to the harmful substance.

Recycled industrial fibers have been experimented with in green-cement manufacturing processes in Italy, while self-repairing concrete is the next big thing in Belgium.

These ambitious projects are hoping to prove that this hardy substance can become less harmful, and Concrete4Change are at the forefront of this movement.

Their innovative design was recently awarded first prize in the Net Zero Category of the UK’s Climate Challenge Cup.

“We need to develop this process and commercialise it as quickly as possible,” he says.

“This solution is essential to the world’s survival.”