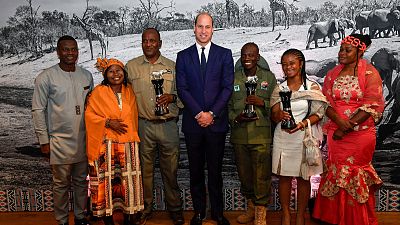 The Duke of Cambridge has made fresh comments this week regarding the ‘pressure’ put on Africa’s wildlife by human populations.

In a speech at the Tusk Conservation Awards on Monday he stated that, “the increasing pressure on Africa’s wildlife and wild spaces as a result of human population presents a huge challenge for conservationists, as it does the world over".

This is the second occasion the Duke has raised the issue of rising African population rates, having made a similar speech at the Tusk Trust Ball in 2017.

The first comments were made while the Duchess of Cambridge was expecting their third child, leading to accusations of hypocrisy, as the couple now have more children than needed to replace themselves.

So why is Prince William so focused on growth in Africa, and is it fair for a Royal from Europe’s second most densely populated country to point the finger?

While population growth studies can only ever be predictions, as they are unable to factor in the consequences of global events such as war, famine and migration, they make particularly catchy headlines. Especially as this kind of growth tends to go in waves around the world, with some populations shrinking while others rise.

Globally, the amount of people in the world is predicted to rise steadily over the coming decades, reaching 8.5 billion in 2030

Between now and 2050, the UN predicts that half of the world’s population growth will take place in Africa, which will double the continent.

In contrast, populations in Europe have been steadily declining for decades, and fertility rates are now below the levels required to replace them, with an average of 2.1 children per woman.

What is the difference between growth and density?

While population growth in Africa may seem large when looking at these stats, what Prince William failed to factor into his speech was population density and the role this plays when it comes to distribution of natural resources.

“There is also a wider context, with high consumption in rich, developed countries like the UK also driving habitat destruction, climate change and pollution - all drivers of extinctions. Addressing our consumption here is essential too.”

The UK has the second highest population density in Europe, after the Netherlands, with 281 people per km2. In comparison, Africa’s density is just 45 people per km2, while the most densely populated country in the world is currently Bangladesh, with 1,252 people per square kilometre.

Africa isn't even in the top two most populated continents - it's Asia, then (surprise, surprise) EUROPE. The UK is also one of the most densely populated countries in the world.

Prince William needs to mind his own rarted business and take his neo-colonial mindset elsewhere. https://t.co/wPgtflO6G8

Taking population density into account is incredibly important when it comes to growth, as within more densely populated countries there will be much higher competition for natural resources and thus more pressure on ecosystems and wildlife.

This is highlighted by the fact that the UK is one of the most nature depleted countries in the world, with only 53 per cent of its biodiversity left, according to a study by the Natural History Museum. The global average for biodiversity is 75 per cent.

What about the carbon footprint of UK citizens...William?

Another important factor that Prince William failed to take into consideration, is the carbon footprint of citizens in the Global North in comparison to the Global South.

A study from Oxfam released in January 2020 found that the average British citizen is responsible for more CO2 emissions in just two weeks than a resident of any one of seven African countries in an entire year. The countries in question were: Rwanda, Malawi, Ethiopia, Uganda, Madagascar, Guinea and Burkina Faso.

For further comparison, the Eco Expert estimated the annual carbon footprint of the UK’s Royal family in October this year, and found that their carbon output was a huge 3,810 tonnes, while the average Brit emits just 10 tonnes per year.

While Prince William’s renewed comments may be coming from a place of genuine concern for the plight of planet Earth, his mode of expressing himself is unwittingly placing him in poor company.

Eco-fascism is a theory which sees overpopulation and immigration blamed for the effects of the climate crisis. The burden of blame is often placed on black, brown and marginalised communities, the very people who have been least responsible for overconsumption and mass industrialisation.

Africa’s population is on the rise due to a number of factors, including better healthcare, longer life expectancy and a much younger population on average than Europe’s - with a median age of 19.7 years compared to Europe’s 42.5 years. But if the UK genuinely cared about growth it wouldn’t be cutting aid.

“The number of women (in sub-Saharan Africa) with an unmet need for safe, modern contraception is actually rising,” says Maynard.

“Despite that, the UK government has slashed aid to the United Nations Population Fund which does vital work meeting that need. Empowering women with access to and choice of contraception is crucial to reducing poverty, enabling development and addressing the extinction crisis.”