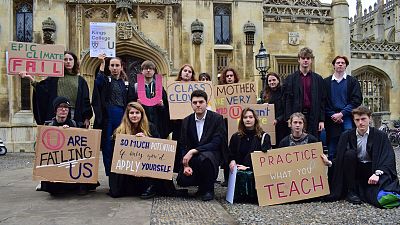 Cambridge and Oxford students turned the tables on their universities last week, grading each Oxbridge college on their climate policies.

Both British institutions committed to divest from fossil fuels in 2020, but students have been examining the finer detail of those and other environmental pledges - and they aren’t impressed.

Fridays for Future (or School Strike for Climate) is the loudest, most visible grassroots student movement in recent memory, but young people have been pushing the hardest on climate action for years.

Students have a special moral authority to do so, as Naomi Klein wrote in 2014 - the same year Glasgow University became the first university in Europe to divest. “These are the institutions that are entrusted to prepare them for the future; so it is the height of hypocrisy for these institutions to profit from an industry that has declared war on the future at the most elemental level.”

The student-led global divestment movement has made a world-changing difference to the course of climate change. Endowments, portfolios and pension funds worth almost €40 trillion have been diverted away from the most polluting industries, according to the latest calculations of the global database. That’s larger than the GDP of the US and China combined, 350.org founder Bill McKibben writes.

In September, Harvard University became by far the wealthiest institution to announce its divestment from fossil fuels, hard-won off the back of 10 years of campaigning.

Fighting fiercely for their futures, students expect ambitious policies. A divestment commitment is an important step for a university to take but they come in different sizes - and at different speeds.

The University of Gloucestershire, for example, took the decision to fully divest from all direct and indirect investments with immediate effect in 2018, topping People and Planet’s University League table. While Cambridge University gave itself a longer lead time of 10 years.

Are Oxbridge really leading the way on climate action?

Cambridge and Oxford are made up of around 30 colleges, where students live and receive tutorials. Almost every one received a ‘fail’ grade according to the calculations of the Climate League of Oxford and Cambridge (CLOC).

Founded by the student unions of the world-famous universities, the CLOC tables went live on19 November. Mimicking the league tables which rank the 68 colleges each year based on their students’ academic performance, CLOC dished out 57 ‘U’ grades - the lowest grade possible.

Decarbonisation is the biggest point-scorer, with colleges assigned points based on how well they measure and limit their emissions (from electricity and heating, for example), as well as their date for reaching net zero.

Divestment was another big factor, followed by ‘delinking’ - which looks at what colleges are doing to weaken the social license of fossil fuels, for example through refusing gifts or donations from implicated banks.

“When we applied the same high standards they use to judge students academically to their responses to the climate emergency, they failed spectacularly. For institutions

with eye-watering reserves of wealth, this is a stunning betrayal of their responsibility to act.”

Jesus College Cambridge and Somerville College Oxford - whose alumni include novelist Nick Hornby and former British PM Margaret Thatcher respectively - came top of the tables, albeit with only C and D grades.

Why are other European universities lagging behind?

As of this month, 92 of the UK's 154 universities have committed to divest from fossil fuels. Universities in the US are also speeding up the transition to green energy, with more than 60 divesting.

But on mainland Europe, only 18 educational institutions have committed to do so, according to the global database run by 350.org. They are based in Sweden, Belgium, Germany, Ireland, Denmark, Italy and Norway.

As the majority of continental European universities are publicly funded - lacking the huge private endowments built up by the likes of Oxbridge and Ivy League colleges - they have much less money to divest.

However as students have argued, universities wield a significant amount of social capital, and have a responsibility to lead by example.

Tina Langkamp, a divestment campaigner for 350.org, has suggested that the longer history of the divestment movement in English-speaking countries is one reason why students in the UK and the US have had more success.

By far the most famous university divestment campaign was that levelled against apartheid South Africa in the mid-1980s.

“The concept of divestment was not known in Germany outside of the finance sector,” she told Science Business.

“Divestment was not a word or tactic people were familiar with. It was much easier for English-speaking countries to pursue fossil fuel divestment because it was historically known. Social movements pass on history.”

With youth strikers who joined Greta Thunberg back in 2018 now reaching university age, any slow moving institutions will soon be forced to move with the times.