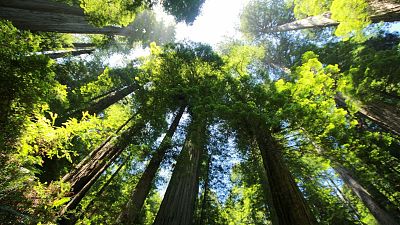 Ukraine's president Volodymyr Zelenskyy has announced ambitious plans to plant one billion trees across the country in the next three years.

The announcement came just days after climate negotiations ended at the COP26 summit in Glasgow.

Along with the 27-nation European Union, Ukraine hopes to plant around three billion trees over the next decade to restore the "lungs of the planet".

There are also plans to build more than ten modern breeding and seed centres in the next three years in Ukraine.

In the country's northern Zhytomyr region, workers are putting small tree seedlings into the ground in an attempt to counteract the effects of climate change.

"[The whole of] Europe declared plans to plant three billion trees in ten years, but our plan is planting one billion in three years," said Yuriy Bolokhovets, head of the state forest agency.

But one scientist says the "unrealistic" aim cannot be achieved.

"This is absolutely unrealistic in terms of space and timing planned by the president," claimed Ukrainian nature conservation and biodiversity expert, Bohdan Prots.

"They must plant 10 trees or 200 seedlings in a second, so this is not possible, technically," he added.

With a surface area of more than 600,000 square kilometres, Ukraine is the second-largest country on the continent, counting Russia in its entirety.

According to experts, approximately 16 per cent of Ukraine's territory is covered by forest, and three to four per cent more is needed to combat climate change.

Scientists revealed that the most effective way to fight global warming is to plant a trillion trees.

However, foresters in western Ukraine say they are already seeing the effects of climate change, with higher temperatures and lower groundwater leading to the drying up of European pines, the most common tree in Ukraine's part of the Carpathian Mountains.

"In my opinion, global warming is the main reason for the drying up of the European pine," noted Vasyl Dmytryiv, the head of Ukraine's forest unit.

A 2019 study by Swiss scientists revealed that the most effective way to fight global warming is to plant a trillion trees, if not more.

The study calculated that over the next decades, those new trees could suck up nearly 830 billion tons of heat-trapping carbon dioxide from the atmosphere — about as much carbon pollution as humans have emitted in the past 25 years.

Green financing isn't effective but Europe can fix it | View

Where do all the words and numbers we heard at COP26 leave us?

COP26 takeaways: Some progress in climate pact but much more needed