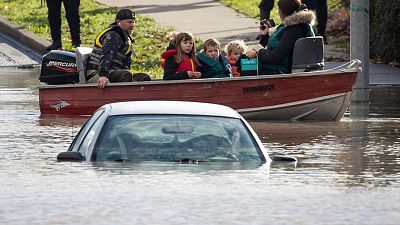 Volunteers came to the rescue of those stranded in British Columbia.   -   Copyright  Jonathan Hayward/The Canadian Press via AP
By Lottie Limb  •  Updated: 23/11/2021

Enda Brophy and his wife were driving back home to Vancouver from a holiday in British Columbia, Canada when a deadly storm hit. Described by meteorologists as an ‘atmospheric river’, it destroyed all their routes and left them stranded in a city called Hope from Sunday until Thursday. Here he describes the climate disaster, the human response and what it’s taught him. As told to Lottie Limb.

I kept on thinking of the storm as other-worldly. ‘Other-worldly’ seemed to capture the storm because it showed us a different world, but it’s the world that’s coming, the one we’ll be living in soon. My time stranded in Hope showed me that one of the most important parts of that world is going to be collective community, to mitigate the effects of climate change.

My wife and I had gone to Kelowna for the weekend - our first time away without our kids, who are seven and nine, in two years. You can imagine how excited we were. We left at about 1pm on Sunday for the four hour drive back to Vancouver.

That morning, we got weather updates so we knew a system was coming in, but over the last month in the Lower Mainland we've had about six of these events, so they’ve become a part of life. We made a rough calculation that we’d encounter the storm on the last hour of the journey home and it would be challenging, but okay.

The Coquihalla Highway was closed when we got there. Driving north to reach the Number 1 Trans-Canada Highway further up we passed by a town called Lytton BC. You might have heard of it: it’s the town that recorded the highest ever temperature in Canada before burning down.

As we got closer, we saw signs of this summer's forest fires everywhere.

We saw the signs of this summer's forest fires everywhere.

But the Number 1 Highway was closed too, so we had to retrace our steps, and it was at this point that the weather system hit us. We decided to stop for a quick dinner, for just 45 minutes in the city of Princeton, before pressing on. There are two routes back to Vancouver and though the Number 1 had shut, we knew the Number 7 Highway was still open.

The drive between Princeton and Hope was the most terrifying I've ever been on.

The storm was torrential, like nothing I've ever seen. There was debris on the highway, there were moments where cars were in gridlock and traffic. Sections of the highway essentially had rivers running across them.

We eventually got to Hope to hear that the Number 7 had been closed 45 minutes ago - because of two mudslides, as we discovered later. The great irony is that we were cursing our luck when ​​instead we should have been thanking our lucky stars that we decided to stop for a meal.

Of course, my thoughts go out to the people who are lost.

How I found ‘remarkable’ solidarity in Hope

Pick the apocalyptic movie of your choice - that was what we were confronted with.

There were really long traffic jams, the rain was coming down. Hope had lost power so all the buildings were dark. We headed to the closest gas station, which became a hub for displaced people. Denny's (a chain of restaurants) stayed open and they were serving around the clock.

Solidarity was the most remarkable aspect of the otherwise fairly traumatic event, and it was everywhere. People all over the city were deciding how they were going to distribute and ration the resources that they had, in ways that were tremendously inspiring.

The next day, the owner of a downtown theatre realised that there were hundreds of children who were displaced, and probably quite traumatised by the events of the day before so he started showing kids movies for free.

People were helping each other left, right and centre. Yes, there was some hoarding, but locals were also streaming past with pillows, towels, dog food, sanitary products and games for the kids.

From day one, the dominant mode of interacting with other people was that of collaboration and mutual aid. And it was really uplifting. I will take that with me, in my life.

What being caught up in the storm taught me

How we extend those relationships of solidarity and make them a part of everyday life is a tremendously important political question. It’s one I’ve been grappling with for years [as a professor of communication specialising in social change].

The state has some role in facilitating it, of course. But one of the interesting things about the shelter in Hope was that it was more or less entirely volunteer driven. The city (and its Mayor) did not have an emergency plan in place.

The second evening in Hope we had to go to that shelter, because the conditions were too serious for us to sleep in our car. Running off a generator, the local school was able to put together a small meal for around 700 people.

The people working at the shelter were also involved in local poverty relief efforts, at soup kitchens and so on. And so there was a pre-existing informal network which sprang into play. You can imagine how much stronger those networks would be if they were seriously funded by the government.

Part of what made driving from Princeton to Hope completely terrifying was the knowledge that if anything happened, we couldn't call for help, because of course a storm is a challenging situation for telecommunication systems.

But the airwaves belong to us, and the companies that have cornered the market should be enlisted to build a future-proof communication infrastructure.

The internet was tremendously spotty too, so radio was an important source of communication for us. But on Monday morning, waking up with every highway destroyed, wondering how we’d make it back to our kids, the national broadcaster (CDC) cutaway to a pre-programmed arts and culture show. It was entirely surreal.

My thread on the last week has gone viral [with over six thousand likes to date].

But driving white-knuckle terrified to Hope, I was thinking ‘thank g-d I didn’t buy that electric car’ because there were very limited charging stations on that route. I just couldn’t imagine running out of power. So why is there not an abundant, fully electric infrastructure on those routes?

I don’t want to exempt myself from responsibility, but I think the individual analysis really lets the people who are most responsible off the hook.

Despite the very recent notable failures of those who govern us to make a difference, there is a counter-force of people organising collectively, sometimes spontaneously from below.

My experience opened my eyes to that: it’s quite clearly going to be one of the key dimensions of the climate crisis that lies before us.

Enda and his wife Julie are now safely back home in Vancouver with their children.