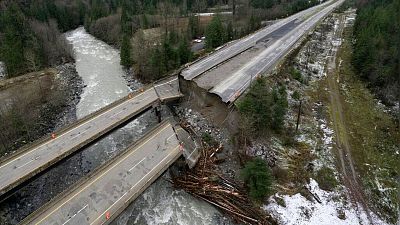 Damage caused by heavy rains and mudslides earlier in the week is pictured along the Coquihalla Highway near Hope, British Columbia   -   Copyright  Jonathan Hayward/THE CANADIAN PRESS
By Scott Duncan  •  Updated: 19/11/2021

From dangerous heat and destructive wildfires to record breaking rainfall and catastrophic flooding, parts of British Columbia, Canada have been at the epicentre of two top-end weather extremes within the space of a few months.

The infamous heat dome started breaking national all-time records in British Columbia on the 27th of June. The old Canadian national heat record stood strong since July 1937 (45.0°C), only to be beaten on three consecutive days at Lytton, BC to take the new all-time national heat record for Canada to a staggering 49.6°C on 29 June 2021.

To beat a long-standing national heat record by nearly 5°C is simply outrageous.

Such heat is virtually impossible in a past cooler climate. Relentless and extreme heat exacerbated the destructive spread of wildfires, which ravaged the area shortly after the historic temperatures were recorded.

Many Parts of Canada still face extreme and locally exceptional drought conditions as of 31 October 2021.

...then, the rain. Just 140 days from the hottest day to the wettest

Merely 140 days later in November 2021, the atmosphere had another extreme in the pipeline with the cross hairs targeting the same communities of British Columbia which suffered some of the most ferocious summer heat. This time, the story was all about rainfall.

Burn scars from summer wildfires were responsible for increasing the destructive nature of the flooding. Debris flows and mudslides were reported near Lytton Creek, an area which suffered intense wildfires. Burn scars can exacerbate flash flooding as there is no vegetation to absorb the rainfall, the water can run along the surface and quickly turn into a flash floods downstream.

The summer heatwave and wildfires can deliver flash flood-related impacts long after the fires have stopped burning.

On 12 November 2021, a strong thermal contrast existed between Alaska and California. Cold records were not broken in Alaska but a few date heat records tumbled in California.

The huge contrast in temperature was extreme, particularly for this part of November. Whenever there is large thermal contrast, it is often useful to look at the jet stream pattern to see the weather pattern involved.

This configuration allowed the jet stream to dig south in the Pacific, which helped scoop warm and moist air all the way from the tropics.

If the atmosphere conditions are just right, atmospheric rivers can transport tropical warmth and moisture into the same location for consecutive days. This is exactly what happened in British Columbia on the 12th to 15th November 2021. The result was incessant and often heavy rain. When the atmospheric river collided with terrain over British Columbia, rainfall intensities were enhanced further (this is known as orographic lift). All the ingredients came together to deliver a ‘firehose’ setup where deep tropical moisture slammed British Columbia for consecutive days. Some weather stations recorded their wettest day in history.

Atmospheric rivers themselves are not a new phenomenon; they are actually fairly common and can be found all over the world. There was an atmospheric river recently which impacted Europe and led to flooding in Northern England and Southern Scotland.

This ironically coincided with the beginning of COP26 in Glasgow and contributed to significant transport disruption.

There was also another extreme atmospheric river event that set new daily rainfall records in California in October 2021.

In the context of climate change, atmospheric river events now have the ability to reach extreme rainfall thresholds more easily compared to a past cooler climate. Very recent research tells us that ongoing climate change impacts on atmospheric rivers could drastically increase extreme precipitation events in the future for some parts of the world, including North America, South America, Europe, South Africa and Polar regions.

The ever-warming climate makes extreme thresholds easier to break in both rainfall events and heatwaves. The fingerprints of climate change are all over both of the extremes faced by British Columbia in the last few months.