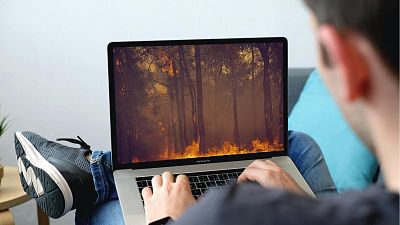 The spread of climate misinformation online is getting more sophisticated.   -   Copyright  Canva
By Rosie Frost  •  Updated: 18/11/2021

To limit global warming to 1.5C we need urgent action but the spread of online climate misinformation could be holding the world back.

But how do we define climate misinformation?? As our understanding of the climate crisis advances and the scientific consensus becomes increasingly absolute, the ways in which those who don’t want change share their messages have become more sophisticated.

Between January and October this year, Stop Funding Heat found 113 ads on Facebook with messages like “climate change is a hoax”. It was roughly estimated that between €50,000 and €65,000 was spent on these adverts.

And it's not just misleading adverts that are causing problems. According to another recent study, $2.6 billion (€2.3 billion) a year is being spent by big brands advertising on websites that carry misinformation on a number of topics - including climate change.

“It's a multi-million dollar industry that is unfortunately funded through advertising and proliferates in our online spaces, including on the social media platforms that we all use,” Harriet Kingaby, co-founder of the Conscious Advertising Network (CAN) tells Euronews Green.

A shift from denial to delay

For those of us on social media, messages of outright climate denial have become relatively easy to spot. But, as the science around climate change becomes more concrete, misinformation is evolving and becoming harder to identify.

“We have seen a shift from denial messaging like climate change is a hoax, it's not happening into much more sophisticated delay messaging,” Kingaby explains.

Scientists have identified four of the most common strands of ‘delayism’; redirecting responsibility, pushing for non-transformative solutions, emphasising the downside of action, and finally surrender - the idea that it is not possible to prevent climate change.

As the public conversation around the ongoing crisis changes rapidly, the range of arguments used to try and prevent action does too, the study says.

During COP26, misinformation was monitored daily by the Strategic Dialogue Institute and more than 10 other climate organisations. They found that online content was increasingly extreme in nature across the board, from “culture wars punditry” to conspiracies, pseudo-science and “brazen denial”.

The Global Disinformation Index also found that, every time an announcement was made during the lead up to the climate conference, there was an uptick in the amount of disinformation being shared online.

For meaningful action to come from an event like COP26, people have to understand the solutions and get behind them, which is impossible when doubt is being cast on science or false solutions are offered that won’t fix the problem.

We have monitored climate mis- and disinformation for the entirety of #COP26. There's a lot of it, and it threatens to undermine global efforts.

Officially recognising climate mis/disinformation as a threat should be an outcome of @COP26.https://t.co/98MxMG2A5A

This is why CAN, alongside 250 other signatories including groups such as Avaaz, WWF, and the Centre for Countering Digital Hate have written an open letter to the UN asking for action on climate misinformation.

The open letter calls on world leaders and social media platforms to adopt a clear definition of what climate misinformation and disinformation actually are, so that the problem can be identified and dealt with.

A definition for climate misinformation

“There was a study done a few years ago by Harvard University which suggested that misinformation flies through our social spaces six times quicker than the truth,” Kingaby says.

“It's often framed in ways that suggest that we're going to lose something.”

That doesn’t mean there isn’t space for more than one opinion, however. Protecting the right to freedom of speech and freedom of expression is important but, as Kingaby says, there is no right to get paid for things that cross a line.

If we're all just making it up as we go along, we could actually impact freedom of speech.

“With the climate misinformation space, actually, if we're all just making it up as we go along, we could actually impact freedom of speech.”

She explains that for this reason, definitions are really important for outlining what is acceptable and what isn’t. The UN, for example, has already created a definition for hate speech that allows us to identify the kind of content that can cause real-world harm.

Having a definition would create that line between what is acceptable and what isn’t. CAN has worked with climate organisations and experts to create a definition and now hope the UN and tech platforms will adopt it.

One tech giant is already listening to what CAN have to say about the issue.

“Earlier on this year, Google made an announcement and created a climate misinformation policy. And we worked with them on that,” Kingaby explains.

The company announced a new policy developed together with the group which “prohibits ads for, and monetisation of, content that contradicts the existence and causes of climate change.”

It comes after many tech and social media companies cracked down on misinformation around COVID-19 adding fact checks to posts about vaccines and the pandemic. CAN believes this sets a precedent for what they could do for information around climate change.

“So we know that it's possible,” the CAN co-founder adds.

“What we really want is for other organisations to see that as a precedent and say, hey, it's been done, hey, we can do it too. And we think that actually, if that happens, then we can create something really good.”